The Gods of Amazon... 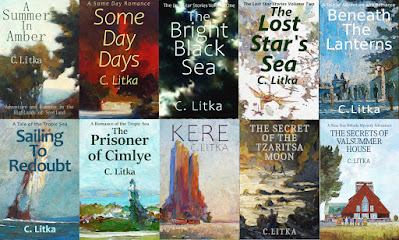 ...Are fickle beings. They’re as unpredictable as they are mysterious. While I'll be reporting my sales for my sixth year in self publishing next month, I thought I might share my results for March 2021. It was a weird month.

My base line is that I write the story, paint the cover, format the paperback book. And after my wife and my generous beta readers proofread the story, I publish it via Smashwords, Google Play, and Amazon. It then sinks or swims on its merits and word of mouth.

Each month I move between 300 and 1,000 copies. The highest numbers are for the month of and just after the release of a new book. The numbers then fall into the 500 to 300 copies per month range. Of all those copies, I actually sell at retail price between 5 to 10 copies on Amazon around the world, with maybe 20 during the month of a new release. I made $70 in royalties in 2020.

March 2021, as I mentioned, has proven to be a very strange month. First off, I moved 1,041 books, which puts it as my second highest sales month in my six years of self-publishing. The Secrets of Valsummer House was released on the 18th, which explains some of those sales. I moved 195 copies on the Google Play store, a venue that I’ve only been using for the last two years or so, and has proven to rival Smashwords (including Apple , though B & N and Kobo don’t report free sales to Smashwords, so I don’t know the full total of my sales via Smashwords.) But there’s more to this strange month than a new release and increased sales on Google.

Every once in a while The Bright Black Sea will rise into the Top 100 Free Space Opera Best Seller List. For no discernible reason. I can only guess that somewhere on Amazon they 're promoting it in some way. In any event, it rose to at least #29 on that chart this month, and I moved 223 free copies, plus, and this is strange, 21 paid copies mostly from British and Australian sales.

What is even more weird is that this month I sold at $.99 a total of 112 copies of my various books, including 35 copies of The Lost Star's Sea (when it wasn’t free) and 41 copies of The Secrets of Valsummer House. I think I earned $49.50 in royalties this month. In all of 2020 I made around $70. I can’t explain this jump in sales. I don’t expect it to last. I believe it to be a result of some sort of quantum fluctuation of Amazon’s algorithms. Still, it makes life interesting.

I’ll have my full six-year report in self-publishing next month. It looks to be a typical year again, with sales somewhat north of 6,000 copies, which is pretty much what it is every year. The only difference is that it now takes 10 books to deliver that level of sales, compared to three when I began in 2015. But more of that next month.