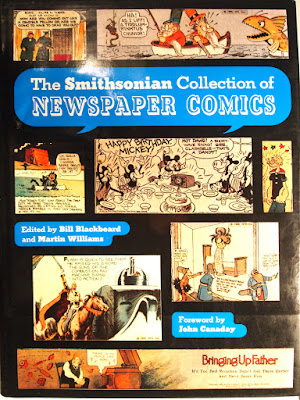 I was not into comic books in any big way as a kid. I can only recall one that I bought for a train trip. I did read a friend’s more extensive collection of comics, but comic books weren’t something I spend my allowance on. As an adult there was perhaps half a decade when I collected comics, because of a friend of mine who was into them. We got to drawing our own. I’ve posted several pages of my work on a SF story this blog a few years ago. You can find them here:Sarfeer Page 1

Though I collected several superhero comics in this period, I also collected and enjoyed the classic Bark’s Scrooge and Donald Duck comics a lot more. I found that superhero comic basically consisted of a recap of the last issue, followed by a bar fight, with nothing ever resolved. And like soap operas, no one ever really dies in comics.

I suspect that around this time I either purchases or received as a gift the book pictured at the beginning of this post, the Smithsonian Collection of Newspaper Comics. It offers over 300 pages of comics from the turn of the last century into the 1060’s. Given my interest in drawing comics at the time, this offered s a treasure house of ideas and techniques to draw on. But more than that, it brought back memories of the Sunday comics I always looked for each Sunday while growing up – and the memory of the strange comics that I’d come across when we were visiting relatives.

As it turned out, people have gone back and collected many of those old comics and offered them in nice big books, that I’ve collected over the years – more for the art than the stories. Though I must admit, never a complete set, save one. 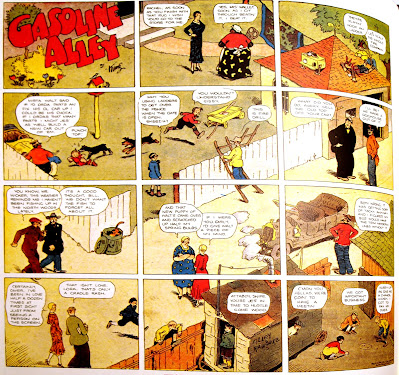 Gasoline Ally was an early comic centered around a single man raising an orphan, along with the early years of automobiles, hence the title. The Sunday spreads were often very creative, as you can see from the sample from the Smithsonian book above. 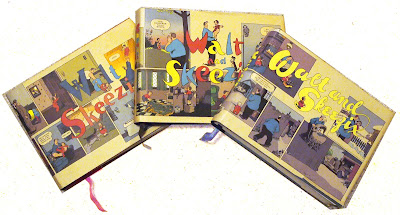 While there is a volume devoted to a sampling of the Sunday color strips, it’s a little too expensive for my taste. I did, however, invest in the first three volumes devoted to the first several years of the daily B&W strips. What I found interesting about them is the parallel between the early automobile enthusiasts, as depicted in the strip, and the early computer enthusiasts. Pioneering car owners of the 1920’s and computer owners of the 1970’s and early 80’s seemed much alike, forming clubs to celebrate their new enthusiasm, exchange knowledge, and to debate the merits of their favorite car or computer. 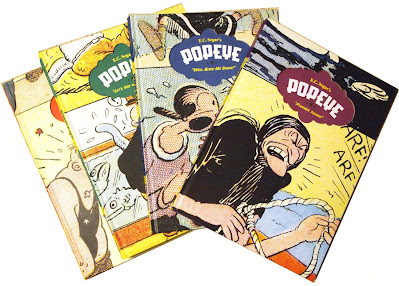 I was, and likely still am, a big fan of the original Popeye cartoons. I loved the gritty art of those Max Fleischer cartoons. The comic Popeye was somewhat of a different character, and the stories much more involved. Indeed, one of the Popeye stories served as an inspiration for a scene in A Summer in Amber. As before, I don’t have the complete Segar collection of Popeye strips, but a good sample of the early stories 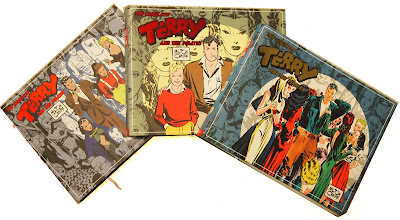 I was too young to ever read Terry and the Pirates, but I’d come across enough references to the strip, and seen samples, so that I picked up the first three volumes. In the war years everyone was fighting the Japanese or Germans, so the stories were all war stories, which doesn’t interest me, so I stopped once the series got into the 1940’s. 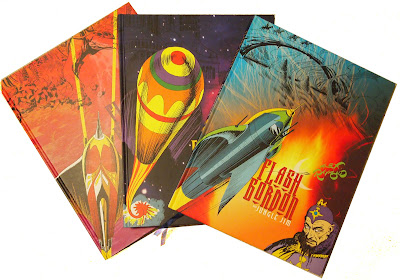 Flash Gordon was another series that I read – growing up. Indeed, I used to clip out the strips in the daily version (and threw them away a couple of years ago.) However, I these Alex Raymond original were released long before my time. Again, I stopped at the war years. It is interesting to see how Raymond’s art became more and more polished as the strip went on. I also have comic book versions of this Jungle Jim series and his style is perhaps my favorite of all the comic book artists – spare, and yet atmospheric. 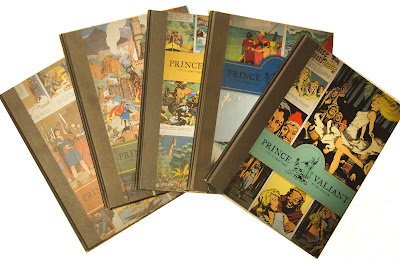 Prince Valiant was one of the Sunday Comics that our local newspaper carried when growing up. I can’t say that I was ever entranced by the story when I was growing up, but as an adult, and as an artist, I really appreciate the fine art of the series.

Last, but not least, I have all the Calvin and Hobbs strips – in their various book releases rather than the big two volume set. This collection is for everything about them. It was the best comic strip ever written. Period. And that’s all that need be said.

Posted by Charles Litka at 1:54 PM