Above is a map for the two Nine Star Nebula Mystery Adventure stories to date, The Secret of the Tzarista Moon and The Secrets of Valsummer House. I don’t include maps in my ebook editions as I don’t know how they will display, and are a pain to find when you need them in an ebook. So if you would like a map, you can download and print this map – and any of my other maps out to use alongside your reading.

I don’t really think either story actually needs a map, but a map is always handy. I like maps in books.

I do, however, need to up my map making game. I know that there are may how-to-do map videos on Youtube that I can use to improve my map making skills, so I’ll have to watch some of them, some time. They tell you not only how to do draw maps, but where to find the resources you can use to make map making easier. For example, where to find things like parchment backgrounds, and map features – mountains, hills, cities, forests, etc. that can be downloaded and used.

Prior to making the map above, I would draw my maps on paper. I would then take a photograph of it. I would open the photo up in Gimp on my computer, straighten up any lens distortions, and add the colors and lettering.

I recently purchased a 13” chromebook and a digital pen to use with it, which is what I used to make part of the map above. You can now install Linux programs on a chromebook, so I installed the Linux version of Gimp and used it to draw and color the map above. I then emailed that version to myself and opened it up on my main computer with a larger monitor to touch it up and add the lettering. So this is my first map done entirely digital.

On The Secrets of Valsummer House, it is currently being beta read. My tentative release date looks to be 18 March 2020. 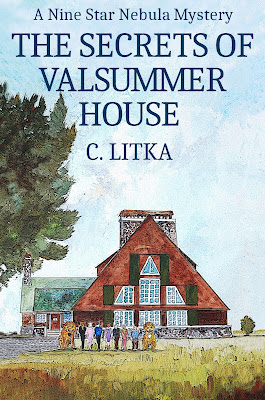 Posted by Charles Litka at 7:02 AM