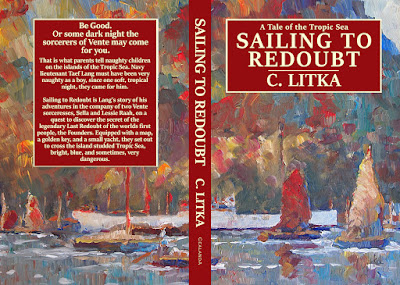 I don't like to read a synopsis of the story before I read the story itself. I like being surprised. And seeing that all the stories I write, I write to please myself, I write their blurbs to please myself as well. So my blurbs are always short, rather vague, and confined to stating the premise of the story, rather than the story itself. With that in mind, below is the current version of the blurb for Sailing to Redoubt. I will say that this story, like Beneath the Lanterns, is set in the same "universe" as the Lost Star Stories. Like the worlds of the Nine Star Nebula, this is a story set on a world settled from earth tens of thousands of years in our future.

Or some dark night the sorcerers of Vente may come for you.

On the islands of the Tropic Sea, parents caution naughty children to behave, or some dark night the sorcerers of Vente Islands might come to carry them off. The fate of these naughty children varies from island to island, but it is often whispered that they end up in a stew.

Navy lieutenant Taef Lang must have been a very naughty boy, since one soft, tropical night the Vente sorcerers came and carried him off. And he certainly ended up in some very hot water.

Sailing to Redoubt is Lang’s story of his adventures in the company of two Vente sorceresses, Sella and Lessie Raah, on a quest to discover the secret of the legendary Last Redoubt of the world’s first people, the Founders. Equipped with a map, a golden key, and a small yacht, they set out to cross the island studded Tropic Sea, bright, blue, and, sometimes, very dangerous.


Sailing to Redoubt will be released in March 2019.

Posted by Charles Litka at 6:22 AM No comments: 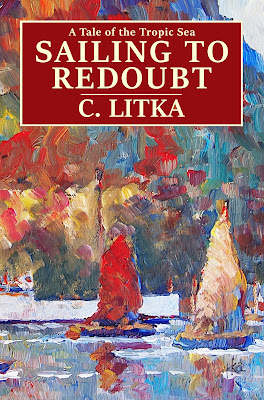 Sailing to Redoubt is my new adventure novel for 2019. The story is set in a tropical sea on an imaginary world.

The seed for this story was actually planted some 65 years ago. I must have been only five or six when I experienced an impression of a place that I have never forgotten. It must have been a dream, though I can’t say from this vantage point for certain. I have very poor memory for my life, so the fact that I remember this dream makes it very special.

What I remember was a vivid impression of a tropical night, dark, lush and mysterious. I seem to remember being surrounded by warm dark shadows and sitting in a chair on a pale, moonlit veranda that connected several huts in a row. Where this impression came from or how I knew it was a south sea night, I can not explain. I don’t have a visual mind, so what I experienced was more an impression, a feeling, rather than an actual scene that I could pin down and describe in detail, even then, much less now, 65 years later.

Still, as I said, I never forgot it. Inspired by that mysterious memory, I wrote Sailing to Redoubt to recapture that impression and put a story to it.

More about that story in the coming days.

Posted by Charles Litka at 4:46 PM No comments:

Teasing My Next Novel 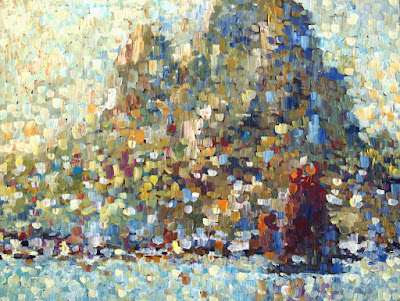 So what's this escapee from my art blog doing illustrating this post?  Well, the answer is that it is a painting of Fey Lon harbor, with the small island of Lil Lon in the background, and just happens to be one of the locales for my next novel. Since it is a painting by a painter who is old and tired of trying to make his painting actually look like what he is painting, you'll need to use your imagination, for now. However, I will be posting more information on the new book in the coming weeks, so stay tuned.
Posted by Charles Litka at 7:46 PM No comments: 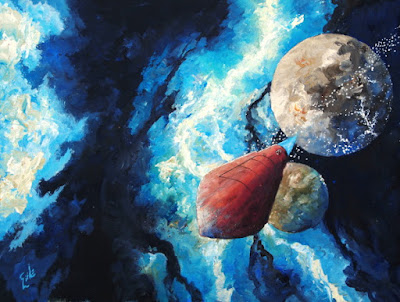 Never one to waste an effort, I'm posting the first two chapters of my abandoned space opera story originally slated as my 2019 novel. This is my working copy -- it has not been proofread, so reader beware. I make a lot of typos that are invisible to me, and no doubt this copy is riddled with them. Still, here is the "nose" of a story that we'll likely never see the "tail" of.

[NOTE ON TERMINOLOGY: “Auton” is the common term for an “autonomous constructed being,” which is to say, a sentient machine. “Auh” is their sexless pronoun.]

02
I was pinged less than a minute later. ‘Greetings, Captain Wei. Ben Singh here.’
‘Greetings,’ I pinged back. ‘I understand you are looking for a captain and crew.’
‘True. I am also seeking an auton that has a thorough knowledge of the trade and an extensive network of starfarers acquaintances throughout the Inward Star worlds. I am prepared to pay over and above your Guild wages for that expertise.’
‘May I ask who am I dealing with and the nature of your mission?’
‘Have I your assurance that this conversation will stay absolutely private?’
‘Yes. I will lock this conversation.’
‘Excellent. My credentials,’ Singh said, and then sent along a small data file.
The file consisted of security certificates testifying as to the credential’s authenticity. It identified Ben Singh was a Senior Adjudicator of the Associated Worlds of Aeroday Trade Court. It established the broad limits of Ben Singh’s authority to investigate and settle cases brought before the Trade Court. Technically the Inlopar Star Cluster was an independent off shoot of the Associated Worlds of Aeroday, so Singh’s authority did not extend beyond the Kaffer Rift, but it would no doubt be respected in the mainline Inlopar worlds. Singh, however, would be on his own among the Inward Stars, but that was a given.
‘I am here, along with a colleague, to investigate insurance claims arising from a recent incident in the Inlopar Inward Stars. For investigative and security concerns, I desire to keep word of my mission as quiet as possible for as long as possible. For that reason I hope you will forgive my unwillingness to be more forthcoming until we have a chance to meet in the guaranteed privacy of my ship. At that time I will layout the mission in detail so that you will be able to make an informed decision.’
A quick, qualified run though my memory modules brought up only one incident that would bring an adjudicator from the Aeroday to the Inlopar Cluster. ‘We’re talking about the Zephyr.’
‘Interested? Can we meet?’ was Singh’s only reply.
Curiosity is not a survival virtue in the Inward Stars of Inlopar. Of course, being a starfarer, and especially one sailing those remote stars is not a low risk occupation to begin with. That being the case, it is safest to sail the orbits one knows, and knows well. And yet… I’d be returning to them soon, in any event...
‘I can meet you at the landing field of Merra Island in one hour.’
‘Excellent. I will see you then.’

‘Meant to disappear?’
‘Ah, that is the other element of this case. It is well known that the House of Lylete has fallen on hard times. Once the most powerful and profitable family of twelve family own conglomerates that essentially rule the planet of Ermin, it has, over the last several centuries suffered from ill luck, poor business decisions, and indifferent, careless management. It is whispered on Ermin that the House of Lylete may be close to bankruptcy. In that light, the cruise of the Zephyr, loaded with priceless collectibles and works of art and the young managing director his friends and on board – supposedly a combination pleasure cruise and sales mission to the Inlopar Cluster to expand its business presence – raises some serious questions. At least in the claims office of the various insurance firms. Even more so since after calling on several mainline Inlopar worlds where one might expect to make some business alliances and make some sales, the Zephyr veered off to the fringes, for no clear reason and disappeared, again for no clear reason.’
‘Selling an over insured ship and cargo to the insurance company is not unheard of,’ I ventured.
‘Exactly. But usually the survivors turn up to collect it.’
‘Not necessarily. It is the owner who collects the claim. He or she need not be on the lost ship. Indeed, it is often better that the disaster happens in the shadows with no survivors, if that can be arranged.’
‘In this case, the owner was on board. And well, why go to all the trouble to make a ship disappear to collect the insurance credits on it, rather than simply selling it?’
‘First,’ spoke up Dinaye, ‘Because selling all these items would be a clear signal that the House of Lylete was in dire need of credits, something I am certain they would hope to avoid. Secondly, if the sculpture that has turned up is any indication of what the other priceless works of art on board consist of, then they would be raising hundreds of millions of credits more by selling them sight unseen to the insurance company than on the open market. Thirdly, if you will, the Zephyr and its contents could be quietly resold, for an additional profit. However, problem with this theory is that the Zephyr and its priceless artifacts are too unique to be readily sold. All those items go on the stolen goods watch list. The Zephyr was a custom built yacht. It could not turn up anywhere in the Aeroday worlds, or even mainline Inlopar without being identified. And all the collectible pieces could not be resold without alarms going off, as it did for our piece.’
‘It could be sold to the Majara or Kifar-San – out of treaty, of course, but there is a bigger market for human goods than the trade treaties allow.’
‘It is something to consider,’ allowed Singh. ‘However, seeing that we are dealing with smugglers in that case, and the lack of a legal currency exchange, such a sale would almost have to be done by barter. And given the size of the transaction, my research suggests that the smugglers would have a hard time coming up with enough goods to match even half the insured price of the Zephyr. Still, we should keep a lookout for a great influx on Majara, Kifar-San or even Reez goods into the fringe.
‘So, as you can see, we have much to investigate. And we are in great need of someone who can open the door to the starfarers society where some of the answers may be found. So will you sign on, Captain Wei?’

I pinged my customary crew, Hu Non and So Sam who were on the beach on Kantea Island, were the starfarers, human and auton, from the ships in orbit spend their time and credits while their ships awaited their cargo of cha. We were a comfortable team and they were always content to await my restlessness to sign on with me. This time they were surprised and delighted to discover that we were to serve aboard a fast, trim, first class yacht, not one of Cy Bar’s old, slow, down in the heels, fringe world tramp traders. Even the prospect of chasing after pirates – as they viewed Singh’s mission, not without a great deal of insight – did not discourage them anymore than it had me.

Posted by Charles Litka at 7:33 PM No comments: