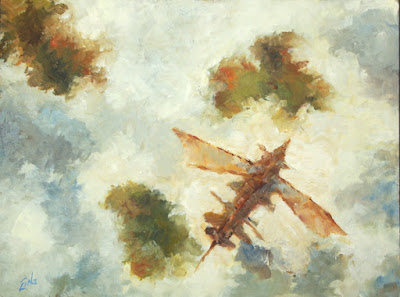 Another painting of the Pela, once again with an eventual cover in mind. I wasn't all that crazy about the last one, and there may well be several more after this one. This piece is more in my impressionist style than the last. I made no attempt at realism. What we're looking at is a small island trader with its sails spread to take advantage of the air currents. I think we're probably looking at the underside of the hull, but then again, maybe not. I guess it doesn't matter. There are several small islands in the middle distance and larger ones, blue in the distance.

Posted by Charles Litka at 3:48 PM No comments: 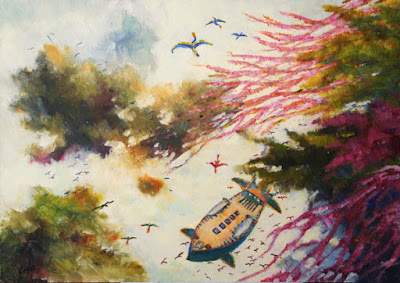 I painted this piece with the idea of using part of it as the cover for The Lost Star's Sea. I will probably paint more pictures of the Pela to see if I can improve on this one. I did take a picture of this last night inside and without a flash that came out very yellow. I just played around with it anyway in Gimp and came up with this very pulpy version of the cover: 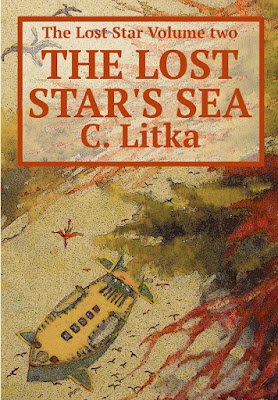 It gives you an idea of how the bigger painting can be used for the cover. I applied my favorite filter in Gimp, "cartoon" to get the sharper, dark outlines and just faded the painting behind the title box rather than make a solid title box. Still, as I said, this is just playing around -- and the bird is still in the bush as far as the book goes. However, I'm 8,000 words into the last section, so progress is being made. (Knock on wood.)
Posted by Charles Litka at 11:08 AM No comments: 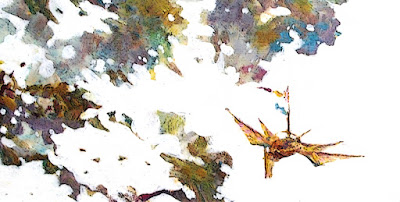 I'm happy to report that work on The Lost Star's Sea is progressing nicely. I finished the first draft of penultimate episode, Windvera, on the 24 Jan. and it's second draft on the 31 Jan. I'm fairly happy with the section. At least I'm happy I have something. Hopefully when I return to it for the third draft in May or June I'll still find that I'll have little to do. I've now started writing the concluding episode, The Dragon Kings, which will wrap up not only The Lost Star's Sea, but the adventures and misadventures of Wil Litang. I'm budgeting six weeks for this section just to be on the safe side, since I want to make sure I've tied up all the loose threads that I can while making it as entertaining and as satisfying as possible, especially since it will be more like the conclusion of a “Who done it” mystery rather than the explosive climax of a thriller. I've got its broad outline well in hand, and have started going over the scenes in my head forming them and trying to put them into their proper place so that everything gets covered, flows smoothly, and is not tedious. I day dream up dozens of variations for every scene – and go over them dozens of times before I write them. And then when I do try to set them down in words, they usually come out differently again – so that I have to rewrite parts of scenes, over and over to get them as true as I can. It is not an efficient process, but a lot of the fun is in thinking about scenes and viewing them over and over from different angles. And then, when I have the words, going over and over them to make them sound good, and clever.


As things stand now, in the mid-March to early April time frame, I should be set to put the final polish on three sections, now probably a year old from first draft, and start the proof-reading process. I don't expect that to take too long on my part, though getting them through the first proof-read will take a week or so each, and then I'll send them out, one at a time every 2-3 weeks to my beta and early readers. Assuming all goes well, we're looking at a July – August release date. If all goes well.
Posted by Charles Litka at 4:37 PM No comments: