Version 1.6 of A Summer in Amber is now available

If you have downloaded but not yet read the book, for your best reading experience download the latest version. While I regret the necessity of making these changes after publication – the sin of doing a large rewrite after proof-reading – ebook publishing does allow me to make corrections, and I am committed to correcting any remaining errors. Leave your favorites in the comment section below for the next revision. Thank you.


Posted by Charles Litka at 5:41 PM No comments: 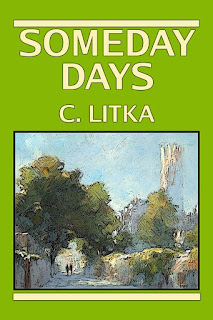 This is a rather accidental novel. Six years ago I set out to write a short story that told its story itself, as opposed to a narrator on high telling you this happened and then that happened, etc. Well, the characters came to life for me, and I went on to imagine many more stories and incidents in their young lives. Over the years, I've managed to set the first dozen stories in words, making up this volume of Hugh Gallagher's memoirs of his first love.

Someday Days is the second of three books I plan on releasing this year. The first was A Summer in Amber, and after this one, is my science fiction space opera, Planets of Call which I hope to release in August 2015. More about that work in the coming weeks.

I'm planning on releasing Someday Days on  9 July 2015 at Smashwords.com for $ FREE.  From there it will be sent to Barnes & Nobel, iBooks, & Kobo, a process that takes about a week. Amazon requires that I set a price, so it will be $.99 at Amazon. Once it is in the competing ebookstores, I'll call that to Amazon's attention and they may reduce their price to $0 as well, at least in the U.S. store.

Be careful what you wish for – wishes can come true, as Hugh Gallagher discovers when the girl of his dreams, the incomparable Selina Beri, comes seeking his expertise on a piece of technology she needs to understand for her last final exam. Can Hugh, the classic shy, geeky, university student, avoid making a fool of himself with the girl he's loved from afar? A romance set in the near future.

Some Day Days is a simple story of first love and friendship set in Oxford and Cambridge England. It reflects my taste for simplicity, understatement, humor, and clever writing (though that's a goal rather than a claim.) Raymond Chandler once wrote that there are two types of writers, writers who write stories and writers who write writing. I aspire to write writing. I started writing Some Day Days six years ago, and finished revising it this year, so this work spans my current writing phase.

It is something of an experimental work, along the lines of Frankenstein. The original subtitle was a romance in an undetermined number of pieces of which this is the first twelve pieces. It began life as a novelette, to which I added a novella length sequel, and then, as my imagination raced ahead, I outlined a whole series of pieces until I had a memoir spanning four years. I use the word "pieces" to describe its parts because no one term describes them all. I have the original novelette, its longer sequel, several chapters of varying lengths, an essay, a gaming story and a ghost story, tied together as the memoir of Hugh Gallagher, a third year student reading Physics and Philosophy at Oxford University – let's say twenty years from now. It does, however, have a beginning, middle and an end, and thus, the essentials of a novel.

The first piece, Kiss of the White Witch is a result of two challenges. The first arose in reading somewhere about a challenge to write a short story centered on the effects of a new technology in the future. I chose a device that records one's life in video as a "dynamic diary" or a "dyary". I wrote this before Google Glass, but after the first such limited devices were being talked about. The second challenge came from my dislike of stories that are told to the reader, rather than having the story play out on its own. Talk being cheap, it's easy to be a critic – so I decided to see if I could write a story that unfolds mostly in dialog. The result was Kiss of the White Witch.

Several drafts later, I found myself wondering how I could bring the two characters together again, and eventually wrote a sequel, a novella called A Shattered Heart – the second piece in this work. I now had two pieces, both too short and too long for anything, leaving me no choice but to plow ahead and write more. Over the past six years I've written the ten other pieces that make up the rest of this work, which cover the first six months of the long romance I had dreamed up.

One should never say never, so I won't. I am, however, unlikely, to write more pieces, so this is most likely a stand alone book. I considered adding an addenda outlining some of the subsequent events, but Hugh wouldn't stand for that, "It's my story to tell. Or not. I'll tell it my way, or not at all," (Artists! It seems that even a small literary effort sparks an artistic temperament!) Still, it is, after all, his story to tell. Or not. I've honored his wishes.

Some Day Days – a little romance of first love set in the near future by the author of A Summer in Amber, is available at most fine ebook sellers. And coming late summer/early fall 2015 Planets of Call, a long space opera with a golden age of science fiction touch.
Posted by Charles Litka at 12:45 PM No comments:

Writing A Summer in Amber

I think my initial idea for a story like A Summer in Amber came from watching the first two seasons of Downton Abbey on Netflix. I seem to remember thinking that I'd like to do a story like that – but with more adventure rather soap opera elements. I quickly decided not to write it as a period piece. First, because I always wanted to write science fiction and by placing the story in the future would make it, more or less, a science fiction story. And looking ahead, genre fiction is generally more popular than literature, so being able to list it as science fiction seemed the way to go. And secondly if I wrote it as a period piece I'd need to research the period to make it authentic and for that I'd have to rely on the work of others, at the risk of being less than original. And no doubt, the story has been told many times as well in the period and after it. So by setting the story in a future I could include the elements of the past I cared to include to give it the old-fashioned atmosphere I wanted, without the need for historical accuracy. Basically it allowed me to cheat.

I'd read an article about the potential threat solar storms pose to societies dependent on an electrical grid around that time and decided to use that idea to knock technological civilization back the several hundred years I need to give the future the Edwardian feel I was looking for. I did want a steampunk air to the story. The imposing of late Victorian technology on the 21st resulted in a different feel than imposing the 21st on the 19th century. A sort of mirror image. And I had no intention of including zombies which seem to somehow become a standard steampunk feature, nor airship pirates or mechanical men. Still, I hoped that the eclectic mix of old and new technologies would give the future a rather pastoral air to it that I rather doubt it will ever have again. Though, I should add that I know enough about the past to know that you'd not want to live it the way it was.

I placed the story largely in Scotland because of my fondness for the Scottish stories of John Buchan, like the Thirty-nine Steps, John Macnab and Huntingtower series, and Compton Mackenzie's Scottish stories like, Monarch of the Glen, Keeping the Home Guard Turning, Whiskey Galore, and Hunting the Fairies. Plus the 1958 version of the 39 Steps with Kenneth More which is, for some reason, is one of my favorite movies – perhaps its on location filming that gives it the nostalgic look and feeling I wished to capture in my story. I spend several weeks traveling about Scotland back in the early 70's via a British Rail pass so I had a little sense of the country from almost half a century ago. This story is based, however, on my travels about Scotland via Google street view. The only way I care to travel these days. And as long as I'm mentioning inspirations, I should also add that E C Segar's Popeye comic strip story from 1930 called the Mystery of Brownstone Hill, served as an inspiration for one feature of this story.

I started writing this story some three years ago under various titles, including,  The Tick Tock Gate, and the Rhymer's Gate. The main thrust of the plot, and the semi-diary approach remained the constant throughout the process, though the nature of the central mystery, and the type of story changed. I don't think I ever seriously considered writing it as a fantasy, but I certainly tried to write it as a mystery or an adventure-thriller. The story is set up by Lord Learmonte insistence that the manuscript transcribed by an outsider in Scotland because of his fear of industrial spies within his organization. In the original version, I had those spies and their activities in Scotland be a driving force in the story. I had envisioned attempts to steal the secret, with perhaps kidnappings and chases across the Scottish countryside – in short, much more like a 39 Steps type of story. I could never quite get to work, however.  My writing style was just too slow paced, and I really like to have actions make sense, and those plots seemed to include too unlikely or unbelievable actions for my tastes. Guess I'm just not that type of writer. So last summer, unwilling to give up on the half-finished story, I decided just to write it as "a novel". A nice, generic novel. Sandy Say would just relate what happened during his summer in the highlands, both the everyday and the extraordinary events, as he slowly fell into the "magic" of those days and youth. Using this "what I did over summer vacation" approach, I was able to finish the story, and, with several revisions since then, losing something like 9,000 words in the process, get it to the point were I felt it was good enough to publish and bering the long project to it's end, in a sigh of steam, the grinding of the brakes, and clank of carriages. 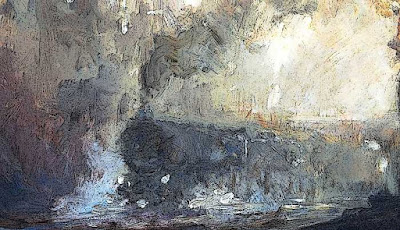 Posted by Charles Litka at 8:06 AM No comments: