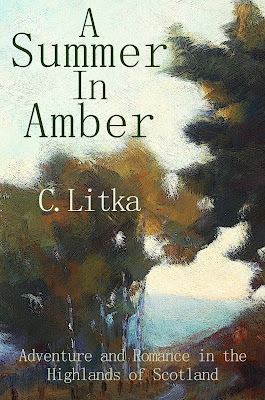 Just for shits and giggles, and with time on my hand, I decided to work up new covers for my books. Last time around I was looking to create a consistent look for branding, and since my stories are pretty old fashioned, I wanted to give the covers a rather old fashioned look. And, well, I should also mention that I didn't want to spend any money on them, so I use my own artwork and create the covers using Gimp, with Gimp's provided fonts. In short, there is nothing elaborate in the process. 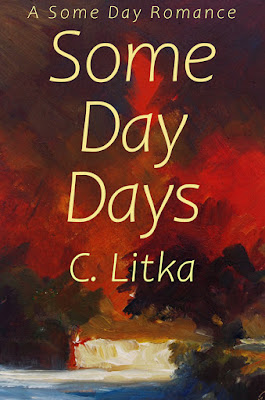 This time around, I'm looking to give the books a more contemporary, literary, and print published look with bolder text and brighter colors. They are not the type of covers best selling genre ebooks boast. In the fast lane of ebook sales one wants one's covers to look just like all the covers of all the other best selling books. I didn't care to do this for, well, as I mentioned, I don't care to spend money on them.That said, I also really don't like the stock photo montages that constitute a lot of the most popular books in their genres. As I said, I'm shooting for a more literary look to my books. 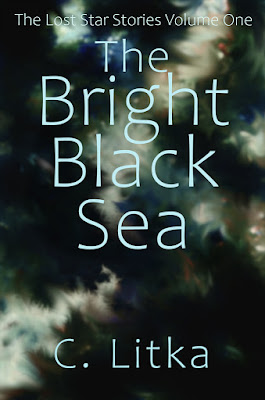 These are the current versions of the new covers. They are subject to change, and depending on sales, may be dropped after a month or so. In any event, I will be changing the covers over on the 1st of February 2020. These changes will apply only to the ebooks, though I could, depending upon results, develop a back cover and change the paper covers as well. But given their sales, it would be a lot of work that would simply make my paper books even more collectible than they already are. 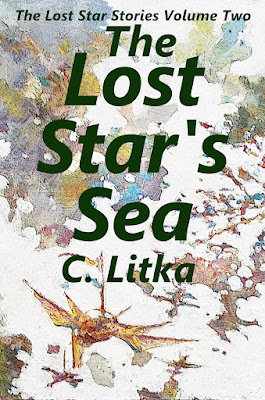 I used the same artwork for A Summer in Amber, though without the people that were added in Gimp for the cover. I also used the same artwork for The Bright Black Sea, though I made fairly significant modifications. I eliminated the planet, changed colors of some of the nebula, and smoothed things out, adding a lot more glow to get that black and bright sea look. I used new artwork for Some Day Days -- mostly for its bright colors and rather graphic look. 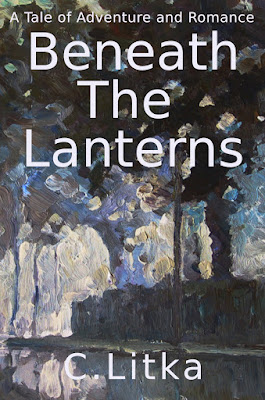 For The Lost Star's Sea I used different art work. I had done a series of paintings depicting something like the Pella, some years ago, and I decided to use one of those paintings instead, adding a bit of black outline to it. I also changed the cover for Beneath The Lanterns. It really has nothing to do with the story, but I think it works for creating the mood I want. Lanterns imply darkness, and though this is not strictly true in the story, I think it works for the cover -- dark and light. 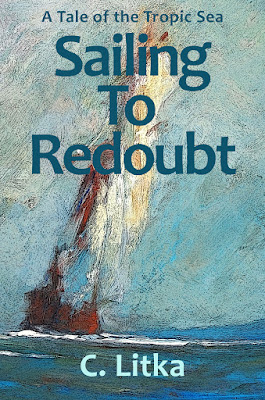 And, as you can see, I also changed the artwork for Sailing to Redoubt. This was a rather sketchy painting of a sailing ship, that I photographed, and ended up painting over. However, I still have the photo I took of it, and by tilting it and adding some black outline in Gimp, ended up with a fairly nice, if abstract image of a ship. Again, it does not really correspond to any ship in the story, but it works to set a nautical mood.

Covers are not a science. There is a general belief that covers sell books -- and to some extent this is certainly true. But what covers sell? For some readers who are looking for stories just like the last one they read, a cover that looks just like the last one they read may well make them more willing to give the new books a try. I don't sell to those readers, so that isn't a concern for me. I sell books to people who try one of my books, like what the find, and try the rest of my stories. I think that by casting a wide net -- writing books in a variety of genre and now, using a set of different covers to attract a wider spectrum of readers, these covers might work for me. Or not. As I said, it's not a science. But I'll give them a few months to see if there will be any significant change in sales. Truthfully, I rather doubt it. But, as I said, I had time on my hands.

However, 1 February I am starting my 2020 story (yet again). This time I'm only shooting for a novella -- 30K to 50K words that will be a sequel of sorts, well, more of an epilogue, to one of my existing stories. I hope to have the first draft written by the end of the month, and the book out by May 2020. But as I have found out, if wishes were horses, beggars would ride. So we'll see.
Posted by Charles Litka at 8:23 PM 1 comment:

The Whimsy of Algorithms

Self-published authors are hostages of algorithms. Who and how many potential readers get to see one’s book in any online bookstore is determined by a secret cabal of algorithms operating mysteriously in the darkness behind the bright digital storefront of these online bookstores. There are books written that purport to teach self-published authors how to beguile these algorithms to favor them. And, of course, you can bribe them with folding money in the form of advertising.

Now, I can’t say how well, if at all, these methods of manipulation work, since I am content to let them work their magic however they care to. But since I do nothing to manipulate them, I can show them in operation.

Let’s start with the Case of the Mysterious Abrupt Slump in my Smashwords sales, as illustrated in the chart below. I wish I had taken a screen shot of it last year so you could see how the release of Beneath the Lanterns affected my sales, and then the redesign of the Smashwords bookstore affected them, but both those events are now off the chart. I’ll use sales figures instead, but first the chart. 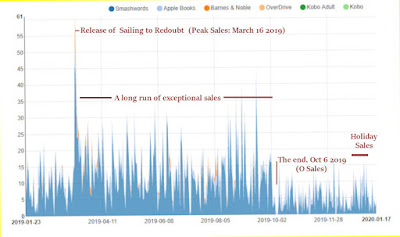 The chart below is of monthly sales that extends beyond the daily sales chart above. 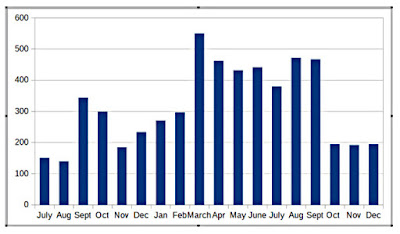 From the chart you can see that we were plugging along at about 140 - 150 copies a month until September 2018 when the release of Beneath the Lanterns goosed sales, though by November that boost as fading. The January 1st update on Smashwords reversed that slide, and the release in March 2019 of Sailing to Redoubt more than doubled my previous sales all the way to October, when it was abruptly halved once again – as illustrated by the chart. Sales boosts across the board with a new release is explainable. The difference between my July 2018 sales and my Oct 2019 sales may be explained by having two extra books to sell. But the large and lasting boost following the publication of Sailing to Redoubt is much harder to explain. Two extra books would account for some of the rise, but not all. And the sales of Sailing to Redoubt are nowhere near explaining the elevated sales, since The Bright Black Sea continued to be my best seller. But the most mysterious workings of algorithms is the abrupt drop in sales on the 6th of October 2019. I can't explain that. I have to believe that it was a change in Smashwords' algorithms in how they listed books in their store.

My second example of the whimsy of algorithms is, The Mysterious Affair of December 30th, which occurred on Amazon at the end of December, as illustrated by the chart below.

That first jump in sales was on Boxing Day (Dec 26th) of 59 copies sold, no doubt because the proud new owners of Kindles and Fire Tabs were looking to fill their new devices with inexpensive content. Sales then, naturally, tapered off until, for some mysterious reason, we have that big sales jump, of some 264 books sold on the 30th of Dec. The bulk of those sales came from the sale of The Bright Black Sea and The Lost Star’s Sea. At that point The Bright Black Sea was the #5 best seller on the free space opera bestseller chart and in the low 600's in all of the free books on Amazon. Since I did nothing to boost sales, whatever caused that jump in sales was Amazon’s doing. And since I have no friends in Amazon, it must have been the work of those mysterious algorithms.

Posted by Charles Litka at 6:54 PM No comments: