I photocopied the cartoon below from a 1933 Nov issue of Punch Magazine from the University of Wisconsin Library many years ago. At the time I dreamed of being an author and I loved this cartoon of an author. I've had this poor black and white photo copy framed for years. The caption reads:

THE STRANGER
Author in search of local colour spends a convivial evening roystering with the peasants at the local inn. 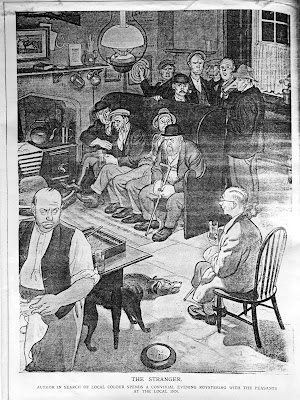 I get a smile out of it every time I see it. Love the dog. Well, now 40 some years later the Stranger could be me. (Though truth be told, I've never had any desire to royster with the peasants.)

In this modern age you can get buy the color a print of it here:
http://punch.photoshelter.com/gallery-image/Vintage-Lifestyle-Cartoons-1921-1961/G0000cKqw3nxQunY/I00005L_VU5C83XQ 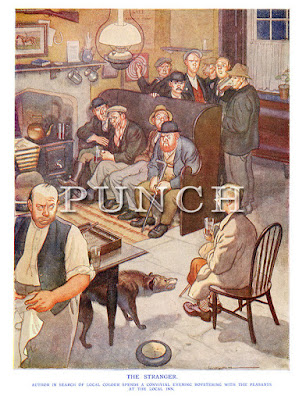 Posted by Charles Litka at 7:35 PM No comments: 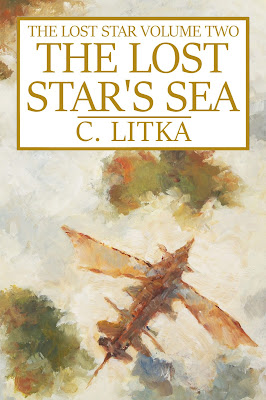 I hope to wrap up my revisions of The Lost Star's Sea within the next 10 days. All I have left to do is to polish up the last section of some 25K words or so. Everything else has been, or is now out for proofreading and feedback from my volunteer beta readers.

What remains to be done then, is;
1) Finish revising the last section of the book, well under way.
2) Get that section proofread and out to my beta readers.
3) I probably will make a map of the section of the Archipelago that the story takes place in to post on the this blog. I don't think a list of characters is necessary, though there are a lot of characters. We'll see.
4) Need to write the various blurbs for the various listings.
5) Make all the corrections my proofreaders and beta readers send back to me.
6) Make some minor revisions to The Bright Black Sea to correspond to changes I made for The Lost Star's Sea -- mostly changes in name spelling and terminology.
7) When all of the above are done, all that will remain to be done is to upload it to Smashwords and Amazon. If all goes well, it will be a Thursday in the last half of July 2017 or early August 2017 As usual it will be free on Smashwords, iBooks, Barnes & Noble, and Kobo, and for a while, at least, $.99 on Amazon. Hopefully they will once more match the free price of their competitors, once the book makes its way from Smashwords to those other retailers -- usually about 7 to 10 after it's published on Smashwords.

I happened to come across this blog post on Quartz, and it really sums up my attitude about not only writing but my painting as well.
https://qz.com/990130/in-defense-of-amateurs/

Chesterton says as much in his biography of Robert Browning:

The word amateur has come by the thousand oddities of language to convey an idea of tepidity; whereas the word itself has the meaning of passion. Nor is this peculiarity confined to the mere form of the word; the actual characteristic of these nameless dilettanti is a genuine fire and reality. A man must love a thing very much if he not only practices it without any hope of fame or money, but even practices it without any hope of doing it well. Such a man must love the toils of the work more than any other man can love the rewards of it.


I think that within the next 10 years, self-published books will be almost entirely written by amateurs, people with stories write and to share with others.
Posted by Charles Litka at 7:15 PM No comments: