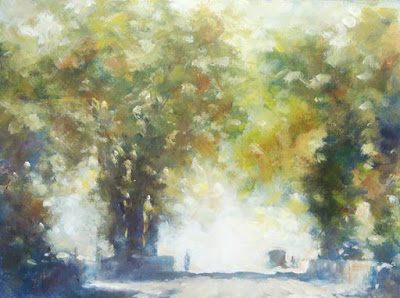 August Avenue is the working title of my 2020 novel, simply because I want to write a novel using that phrase as a title. Unfortunately, I’ve had no luck coming up with a story to really fit that title. Still, that hasn’t stopped me from using it as my tentative title for my current book project. The title comes from the final lyrics of a song titled Duxton, Melbourne on the Kitel Bjornstad and Anneli Drecker’s A Suite of Poems album. It is an album that puts to music the poems of Lars Saabye Christensen about hotels. “August Avenue” evokes something in me, but I can’t say what. In any event, what the final title of this story will be is an open question, mainly because the story that I envision isn’t about any one thing in particular. Maybe I’ll have the boardinghouse on August Avenue. Or the repair shop. We’ll see.

I’ve spent the last six months trying to come up with a new story. Story ideas don't come easy for me. Getting a story started is pretty easy. Getting it to go someplace, and go someplace different from what I’ve written before, is hard for me. So it seems to take me half a year to settle on some characters and a story. Along the way I considered various sequels to Sailing to Redoubt because I had a lot of fun writing about those characters. And, as I mentioned, I explored ideas on how I could make “August Avenue” a key element of a story. I’ve finally gotten to the point where I have started writing a story by cobbling together elements from a number of abandoned story projects, so it will be a rather different type of a story for me.

I like writing small stories. Stories were the stakes may be life or death, but only for the characters, not worlds, or galaxies. And this new story is no exception, except that it may be even smaller. And more leisurely. I realize that I tell my adventure/travelogue stories at a rather leisurely pace, so that setting out to deliberately tell a small story leisurely may alarm some readers. As well it should. However, life is too short to write the same story over and over again, so I try to do something a little different each time – within my limited range of talent and imagination. And a small, slice of life story, is what I want to write this time around.

The good news for some readers it that this story marks a return to an old setting; the Nine Star Nebula of The Bright Black Sea. The opening chapters, which I now have in first draft, concern a small tramp space ship in the Alantzia star system. The Alantzia system is sort of the “Wild West” of the Nine Star Nebula’s Unity. Not quite the “drifts” but close. The rest of the story will be set on a terraformed moon and in a non-Unity-conforming “throwback” society. This will allow me to combine old and new tech together to make an, hopefully, entertaining story. With my opening chapters written (10K words), my ending settled upon, and enough ideas to fill out the middle, I think the story is a go. But nothing is guaranteed, even with all that.

While I started Sailing to Redoubt about this time and had it ready to publish by March, I don’t expect this story will go as fast. I still have a lot of day dreaming to do in order to flesh out the characters and story. And if I write too fast and overrun my daydreams, I risk dreaming up better scenes, or discovering plot holes and so end up having to go back and rewrite it. That's what I do in the second draft. I’m under no deadline, except 2020. If that. Still, it would be nice if I find myself having as much fun day dreaming it up and writing it down as I did the last time around, so who knows?

And with that, I’ll close this post with the first two lines of August Avenue’s first draft:
I took my first steps in becoming a toaster repairman aboard the Aphar Hawk, nine days out of Gan Dou orbit. And I don’t believe that I've ever stepped faster in my life.

Posted by Charles Litka at 4:51 PM No comments: