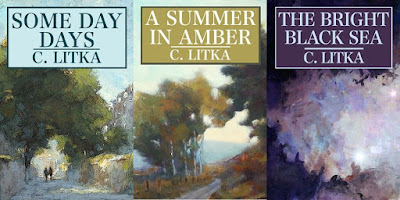 For 2016 I worked up some new covers for my books. I used the same art (my own) but reversed the priorities – putting the titles in the box and letting the art fill the cover. I'm thinking they're an improvement. At least I've eliminated that black outline around the text of A Summer in Amber that was problematical in the thumbnail images.

Everything I read about self-publishing says you need professionally designed covers. You should make your cover look like the covers of other, professionally designed books in your genre because people judge the quality of the book by the quality of its cover. I have to admit I do as well. That said, I can't say I'm all that impressed with many of the presumably professionally designed covers I see. Possibly because they all look alike. Since I'm not writing my stories to be just like other stories in their genre – I'm writing the stories I can't find to read – I think my covers should reflect their outlier nature. And since my stories are rather old fashioned, I think my covers should suggest that too. Which, at any rate, is my story, and I'm sticking with it. That, and the fact that my cover budget is $0, so cover design, as well as everything else, must be done in-house.
Posted by Charles Litka at 6:30 PM 2 comments:

Cin, Siss, and the Pirates of Temtre

Cin, Siss, and the Pirates of Temtre is the first episode in the planned companion volume for The Bright Black Sea, tentatively titled The Lost Star's Sea. It will chronicle the (mis)adventures of Captain Wil Litang in the Archipelago of the Tenth Star. The Bright Black Sea took something like four years to write and I don't anticipate that The Lost Star's Sea, likely just as long, will be written any faster. As of now I'm 65 years old, and can't count on tomorrow, much less four years from now, so I'm planning to release the beta versions of each episode as I produce them. I use the terms "alpha" and "beta" rather than first and final drafts because I haven't a clue as to where the story will end up, and I may well need to go back and make minor alterations in an episode or two to make things come out the way they should in the end. Thus, the individual episodes should be considered somewhat tentative until they are rolled into The Lost Star's Sea. 70,000 years and uncounted lightyears away make transcribing Wil Litang's account a sometimes iffy venture.


Cin, Siss, and the Pirates of Temtre, is a short novel length, 60,000+ word, episode that serves as a bridge between this new novel and The Bright Black Sea. The Bright Black Sea was written as an ode to the golden and pulp age writers of science fiction. In The Lost Star's Sea I'm setting out to write a fond tribute to only one of them – Edgar Rice Burroughs. In the Archipelago of the Tenth Star I have a vast stage filled with strange and wild creatures, savage and advance peoples, swords and sails, mysteries and dangers at every turn that must be faced and if not conquered, survived. I intend, to give those old stories some new twists – I rather doubt any damsels in these tales will need rescuing. Litang, on the other hand... Well, as I indicated, I really don't know where the story will lead us. I have plot elements hanging from The Bright Black Sea to work with, and have tossed in other possibilities as well in this episode, but where they'll lead is anyone's guess. I have ideas where Litang will end up in the next two episodes, but after that, well, I'll just have to wait and see what develops.

I may tinker with this alpha version over the next two weeks, but I plan to put it away until April or May 2016. By then I should be able to approach it bright eyed and bushy tailed, and with the story down, devote myself to crafting the words to make the story as entertaining as I can. Revisions are always more fun than getting the story down the first time, so the heavy lifting is done. If all goes well, I'll release the episode sometime late May or June 2016.

In the meanwhile, I'm hoping to at least get a start on a completely new novel, a fantasy set not in some medieval world, but in a sort of Edwardian age. Motor cars, trains, and the arcane arts of a lost age. We'll see if I can get that to lift.

Posted by Charles Litka at 5:24 PM No comments:

The Bright Black Sea Version 2.0 is now available on Smashwords and Amazon. It will be available on iBooks and Barnes & Noble within the next few days.

Ver. 2.0 brings many "bug fixes", hopefully addressing concerns expressed in some early reviews. I moved the file from a Mac to a Windows machine and a newer version of LibreOffice, which then highlighted many typos and questionable words that the old version had not. Whether this is the result of LibreOffice being a newer version or that over the years of working in the old program many words may've somehow gotten into the program's dictionary and so weren't highlighted, I can't say. I do think that this is a significant update for everyone, and especially if you are just now starting to read a version released before 5 Dec 2015. Not only does it corrected misspellings, eliminate extra spaces and correct punctuation, but I've also straightened out several dozen awkward sentences, improved the constancy of names, made some minor clarifications, and restored "then" to the work.

Some how – no doubt operator error, since it's always operator error – while using the "find and replace" function of the program without a word in the "replace" box to check the usage of "then" (after the work had been proof-read), I must've hit "replace all" instead of "done". As a result, every "then" in the document was replaced with a space. Murphy's Law in action – if something can go wrong, it will. Hopefully, I've now restored those missing "then"s.

This work was written over the course of some four years and the decision to publish it was made only towards the end of the process. Going forward with new works, and with the knowledge that I will be publishing these works, I hope to use the lessons I've learned the hard way and have a process in place from day one that will eliminate these errors prior to publication, producing a cleaner copy out of the starting gate.

That said, there will likely always be some typos. Writing and editing/proof reading are two different professions, and I'm not an editor/proof reader. Professional proof readers charge between $.02 to $.03 a word and editing can jump the bill to $.04 a word. There are about 327,500 words in The Bright Black Sea. If you do the math you'd see that it would cost between $6,550 and $9,825 to have this book professionally proof read, and up to $13,100 to be professionally edited. There is simply no combination of price & sales volume that could ever be expected to produce enough royalties to cover even a tiny faction of this expense for an independently published writer like myself without a large established base of readers. I've read that 95% of indie published works fail to cover their expenses. And I know that it is very common for new authors to be able to count their sales on the fingers of their two hands and put a name to almost every sale as well. By forgoing professional covers, proof reading and paid promotions, I can at least break even with a cover price of free. The actual price of the work, however, will be typos. I will continue to try improve my processes to make that price as small and as painless as possible as well.

To upgrade to the new version you will need to:

Smashwords versions will probably have to be re-downloaded. It's live now.

iBooks versions include a "update" button that should update the book to the newest version when it becomes available. Didn't seem to work, same old version. I was able to get the new version only after deleting it from my collection and then re-downloading it.
Amazon versions should be updated by going to a "Manage your Devices" page and turning on automatic updates. Personally, I've had no luck with this either.
I tried several times to re-download to kindle my Kindle Fire the new version without success even after I set the preferences to automatically update. I deleted it from my account (in you account settings, not just on your device) and tried again. Still ver. 1.1. Contacted Amazon support, I was told it was a technical problem that I'd have to call or chat with tech support. Screw it. I went to Smashwords:
https://www.smashwords.com/books/view/578233
and downloaded the mobi (Kindle) ver. on my Fire tablet and it opened up just fine with the Kindle app. If you're experiencing the same problem I did, this would be my suggested solution.

Amazon Update 15 Jan 16 I read in one blog or another, that Amazon does not update for minor version changes like correcting typos and new covers. At least not without jumping through hoops. So if you've downloaded an earlier version of this story and are only now getting around to reading it, you might want to try another source.

Barnes & Noble versions, haven't a clue. I don't have a B & N account.

Kobo. My computer's OS version is too old for the latest Kobo software, so I don't know how you can update your version. (I only recently discovered that Kobo doesn't report free sales, so I hadn't realized anyone was downloading from Kobo until I saw some ratings on the site. Thanks!)