I'm trying to come up with a new title for my space opera. I had settled on Planets of Call, a reference to the term "Ports of call" used to describe the ports a ship calls on during a voyage. An alternate version would be Worlds of Call. Planets of Call maintains the initial "P" of "Ports", but "World" is a bit more inclusive. A world might not be just a planet, but a moon colony or large space station. The problem with these titles is that is that if the reader isn't familiar with the phrase "ports of call" the Call becomes something other than just a term describing what a ship does, it becomes, well, I'm not quite sure what. And that's the problem.

So I've been toying with alternatives. Such as, Tramping the Nebula, which is descriptive of the story, but "tramping" may be rather archaic. Planets & Pirates, which is also descriptive, but there's more than pirates and planets. The Bright Black Sea, a description of the nebula, which I really liked but my wife thought too vague. Planets of the Neb or Worlds of the Nebula might work, but they're hardly less wordy than the Secrets title, Worlds (or Planets) A'Stern is another nautical possibility.  My current choice is The Nine Star Nebula. Pretty boring, but it's easy to say, looks good on the cover, sounds like a science fiction title and is were the story takes place. What I'm also thinking of doing is adding a sub title along the lines of: The Journal of Captain Wil Litang of the interplanetary freighter Lost Star. Just to make the thrust of the story clearer.

We'll see. I still have several weeks to think of something better.

I also have a new cover for the book, but I'll save that for another post, hopefully when I'll have the final title on it.

Note: My current title now, is my favorite one, The Bright Black Sea and I'm adding a sub-title – A Golden Age Inspired Interplanetary Adventure.

Posted by Charles Litka at 12:37 PM No comments:

This is the first of a series of posts about the upcoming release of the science fiction adventure novel Secrets of the Lost Star with an expected release date of mid-September 2015. 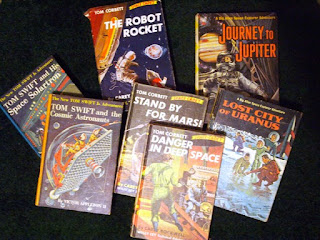 It's rather amazing (and alarming) to realize that this youth is a half a century away, as the paperback books on my bookshelf confirm, with their 40¢ and 50¢ cover prices. One's youth often takes on a golden glow and without a time machine you can't revisit your youth to ascertain the truth of that glow. However, with the books of one's youth, you can go back by rereading them. I've tried that, rereading those magical books that had carried me to the stars and the worlds of wonder and adventure, and discovered that it must have been my imagination, rather than the written words that carried me so far and gave those memories their golden glow. The books were merely launch pads for youthful imagination, since many, though by no means, all, of those wonderful stories seem threadbare to me fifty years later. Oh, the places and ideas were still there, but now the plots are thin and hurried, the characters shallow and the wonders just sketched in. I suppose that's the price of growing up – you may know a whole lot more, which makes it harder to make-believe... 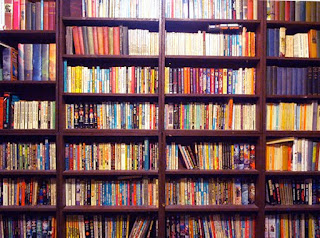 Early in 2013, I decided that if I couldn't return to those golden hued books of my youth, I'd write one instead. One that I could enjoy today. I'd take those old ideas – space ships, robots, space pirates, space battles, and eerie mysteries in the dark reaches of space, and re-use them in a novel with more developed characters, a rich backdrop of everyday details, and drive the story with action that wasn't beyond my ability to suspend my disbelief, while still, hopefully, recapturing the sense of wonder and adventure I experienced in my long ago youth.

The Bright Black Sea is the result of that effort.

I embarked on the project with the idea of writing a serial, using a space ship and its crew as the central feature and then take them to worlds of wonder and danger. I thought that by breaking it down into episodes, I could write different types of stories about them, from straight adventure, to mystery, humor, or even the supernatural. As I wrote it, I gradually abandoned that idea. I don't think my style of writing fits that format – its too leisurely. I don't like things hanging over me, so having to come up with a story on a schedule, and having a story that wasn't resolved, made me uncomfortable. At first I thought that if I launched the series with a book made up of the first five episodes, I could get people into it, and then continue the story writing novellas. But I still needed to have a stockpile of stories, and the story was still unresolved. So when I realized how the story ended, I decided just to write it and publish it as a novel.

While my previously published books have been rather sci-fi lite, The Bright Black Sea is classic science fiction. Classic, being the operative word, because it looks back to the early years of science fiction for its inspiration. However, like my previous work, it is focused on the characters and the mysteries that surround them rather than trying to construct some sort of possible future. Indeed, I've kept the future pretty much like it might have been imagined in 1940 rather than today. Like my other stories, it has a bit of romance, but that plays a far less prominent role in this tale, while mystery, danger and adventure play much more prominent roles. It has a far larger cast of characters as well. However, like an old time movie studio with a stable of actors under contract, I seem to have my own "actors" under contract who take on different names and stories, while retain their own identity or "voice" as well. You'll no doubt recognize the narrater and the romantic lead, but the story has many more characters as well. I hope this combination of the familiar (with new names and stories) and a new scope and direction will not only welcome back old readers, but attract new ones as well.

Coming up next – the background story of The Bright Black Sea

Note: This post has been updated to the current title of the book. We'll see what if finally gets published as.
Posted by Charles Litka at 11:21 AM No comments:

I finished the latest "final" read through of Ghosts of the Lost Star today, and I'm thinking it was indeed, the final one. I was content to do some fine tuning (which I feel the need to do for anything I've written, any time I read it), trimmed a thousand needless words and didn't feel the need to make significant changes. I think I'm done. Finally. My proof reader won't be able to get to it for a few weeks, but I'm planning on a mid-Sept. release date.

Secrets of the Lost Star (lets see if I can get used to calling it that) is essentially a boxed set of an unreleased trilogy. But since the three volumes together tell a complete story, I'm going to cut to the chase and release the work as one long novel. While it weighs in at a daunting 324,500 words, I originally set out to write a serial adventure, and it largely retains an episodic format, which, I think, allows it to be read one's own pace.

In the coming days, I'm planning to post more details about the story of the interplanetary freighter Lost Star and the story behind the writing of it.

Posted by Charles Litka at 4:20 PM No comments: