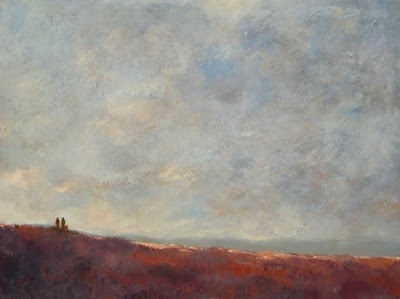 You know that post, the one two posts down, about playing chicken, well, I lost that game. That story petered out… And so did my next promising idea as well. In all these situations, I’d have no problem coming up with the first 30K words. And in each case, I had a series of incidents lined up that promised to carry the story forward. But. But the more I thought about them, the more they did not seem to have the necessary weight, if you will, to drive the story forward. I write episodic novels and you need an overarching story to hold them together. However, the more I thought about these middle episodes, the more they seemed to be just that, episodes that existed only to fill out the middle and carry the story on to a not very consequential end. There are some writers who just write what comes to their head and trust that everything will turn out alright in the end. Perhaps it does. But I hate plot holes, especially my own, so I’m not going to have some character do something just because I need it done. I have to arrange the story so as to allow the character to do what I want done, and this requires planning from the beginning to end. I don’t do extensive outlines, but I do have to have motivations in mind, and I need to place them into the stream of the story from the get-go. All of which means that even though I have solid beginnings, I’m not going put a lot of effort into writing without being fairly certain of a worthwhile payoff. So far, that payoff had eluded me.

As I’ve mentioned before, I’m not under contract, so that I don’t have to mechanically crank out a good-enough story to fulfill a contractual obligation. And since I can’t generate any enthusiasm for these stories, I can hardly expect my readers will either. I do this for fun, and typing away just to get enough words to call it a book isn’t fun.

I don’t think this is classic writers’ block. I can write, I can come up with something like a story, but I just can’t come up with a story that I think is worth writing. I don’t want to rinse and repeat stories. I have my pirates, my bandits, my storms, my romances, and my familiar characters (under different names), and I don’t want to just drag them out, dust them off, and reuse them again without bringing out something new.

There is this term in Taoism, wu wei, which has several subtle meanings, but can use to mean that by doing nothing something gets done, or that by acting only when something can be done, that thing can be done without (much) effort. I’ve decided to apply that principle to my efforts to write. Clearly I'm not at a point where I can write a good story, so I’ll give up trying for now and wait upon some sort of inspiration to seep in when I’m not looking for them.

In the meanwhile, maybe I’ll read some books. I don’t like reading books when there is one in my head that I’m trying to work out, so that by giving up trying to write one, perhaps I can get some reading done. Or maybe I can start painting again. I haven’t been motivated to paint for some time, so perhaps now is the time to try something new, or something old, just to see if my creative juices are still flowing. Humm, might have to wait upon wu wei for that to happen as well...

The long and short of it, however, is that unless lightning strikes, I’m not going to try to come up with a story until after the first of the year. It takes me 5 or 6 months to get a story ready for my proof readers, so that this hiatus does not rule out a book in 2020. But I can’t promise one either. Indeed, I can’t promise another one ever. With more than a million words in print in the last decade, I can’t complain if the well has run dry.

In the mean time, I may use this space to yell at the clouds. That’s what us old men do. For all the good it does.

Posted by Charles Litka at 6:10 PM No comments:

4 1/2 Years in Self Publishing Sales Report

Time flies, and once again it is time for my biannual sales report, covering the period, May 2019 through October 2019. As usual, almost all of the sales are free ebooks sold through Amazon, Smashwords, Apple, B & N, and Google. My books are also available on Kobo which does not report free sales to Smashwords, plus on many other sites that offer free books.

Let’s start by looking at the numbers:

Now, back in May I had written that I did not expect a banner year, for several reasons. While this will probably still be true for the entire year, this first half of the year has been much better than expected. I sold almost as many books in this period as I did last year, which included a strange one day sales on Amazon of 1950 copy in August 2018. If one excludes that inexplicable spike, my sales were actually up 1,819 for the last six months compared to the same period last year. I won’t complain about that.

I have several observations about these last six months.

First is that despite the fact that Amazon is the market leader, by far in ebooks, I sold more ebooks on Smashwords than I did on Amazon. Here is the breakdown of my sales by stores: 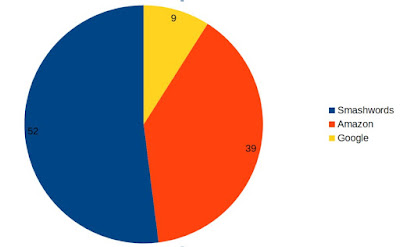 I think that there are several reasons for this result. On the Amazon side, I think that they have fine tuned their sales algorithms to maximize the sales of their best selling titles and authors who appeal to the avid reading Kindle Unlimited subscribers. These are the authors who can move the most copies and who will return the most money to Amazon via their spending on advertising on Amazon's platform. I have no complaints about this, it is just capitalism at work.  I'm happy with whatever sales I can get from Amazon. And since I see an occasional unexplained jump in my sales on Amazon, (though not 1950 in a day) I assume they are doing a little promotional work for me for free. I can't complain.

A second factor may be a result of  Smashwords redesigning their store front at the beginning of 2019. While my sales were up as a result of the release of Beneath the Lanterns in September, the slow decline reversed itself in January, and continued to rise, especially after the release of Sailing to Redoubt in March. After March I was routinely selling in the mid-400 copy range – until this past month, Oct 2019 when, for no apparent reason, sales crashed to 195 copies. Seeing that I don’t do promotions, it is hard to explain such a sudden fall. Perhaps my books had reached most of their audience. Or perhaps they had somehow become less visible in the Smashwords store. (Though I don't see how.)  We’ll see what happens going forward, but without a new book in the next six months, I don’t expect sales to improve.

And that brings us to the Google Play Store sales. While it constituted only 9% of my sales for the first half of my year, as you can see from the chart below, sales have begun to take off.  In October, with the decline of Smashwords, my Google sales constituted about 22% of my month's sales. 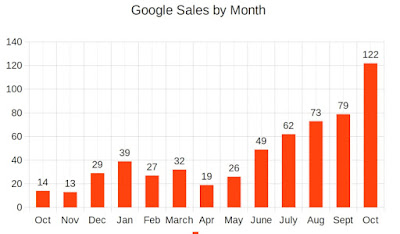 Now, I don't know how high sales will go, or for how long they will continue at the October level, but there seems to be a general trend here, at least for now. And with more sales and more ratings, I believe Google is coming into its own, far outpacing B&N and from the days when I distributed my books to Kobo on my own and saw the sales results, I can say that Google is likely far outpacing Kobo as well.

I expect sales to fall over the course of the next six months, as these sales still benefited from the March release of Sailing to Redoubt. I don't expect to release a new book until next summer or early fall. While I am at work on that book, the going is slow, with many false starts, so I am far from certain if and when my 2020 novel will appear. My hope has been to sell 300 books a month. Now, with six books available, I expect to be able to meet that between the three stores. Even with Smashwords' crash, I sold over 500 books in October, so I think it is do-able. But three of those books are now more than four years old, so it will depend on how those hold up. So far, so good. But.

However, when all is said and done, I'm still having fun doing this. And that is what matters. That, and that you, dear readers, are having fun as well.

Posted by Charles Litka at 6:40 PM No comments: