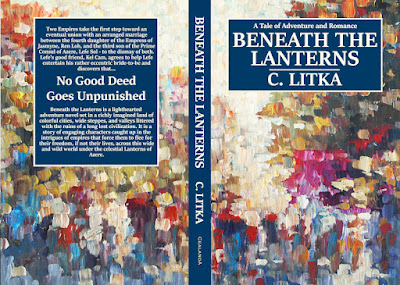 Yep, I'm at it again. I'll be changing the cover of both the print and ebook for Beneath the Lanterns to this art. There are several reasons for this change. One is that I want the ebook and print book to share the same cover art. I didn't like my original cover art which is still have that on the print edition. Not, mind you, that I sell any books, but it shows up in the listings. I do, however, like the art for the ebook version. I can't say that it sell any books, but it doesn't seem to not sell them either. However, the original art work is smaller, and I didn't think it would scale up to 9x6" at  300 dpi very clearly. So what I did was essentially repaint the same scene, the street alongside the lake, the "Reed Bank" in a similar, but slightly more current "Use your imagination" style abstract landscapes on a larger scale. I think this turned out as well as can be expected. I'm going with colorful, if "artsy" covers.

Below are the two complete original paintings I used. On top the new one, below, the one I used for the ebook version
.


Posted by Charles Litka at 7:28 PM No comments: 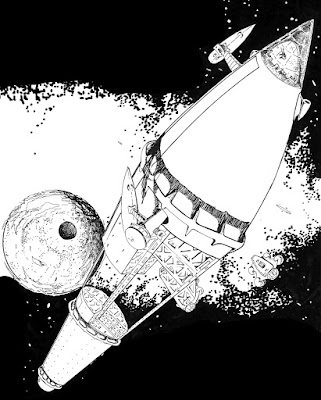 I had planned a return to the space opera motif for my 2019 novel, this time using good, old fashioned FTL star ships. I had it set in the Aeroday and Inlopar star clusters that I had imagined for stories many years ago. I also wanted to make the story a mystery story, just to try my hand at that type of story. I envisioned a sort of Raymond Chandler style mystery set on some seedy planets in the Inlopar fringe stars. However, as you may have gathered from my use of the past tense, the project didn’t end well. It ended at 7,000 words.

It started out promising. I had a pretty solid plot and was confident that all the unresolved details could have been hammered out as I went along. What tripped me up was time and space. Too much time and too much space. But before I get into that, let me briefly outline the story I had in hand.

The narrator of the Inlopar Stars was a sentient machine star ship captain. It had many years of experience in the fringe stars of the Inlopar Cluster. Our narrator was hired by another sentient machine, an insurance claims adjudicator from the Aeroday worlds to be a guide and assistant investigator once they reached the fringe worlds. The adjudicator was investigating insurance claims arising out of the disappearance of a very expensive yacht in these remote stars and under very questionable circumstances. The adjudicator had two human investigators in tow as aides.

The yacht in question was owned by one of the wealthiest families of a planet. The family businesses had been mismanaged for many years and the family was rumored to be on the brink of collapse. The current head of the family took this very expensive yacht filled with very rare objects de’art for a cruise to these remote stars, apparently on a whim. It went missing. The insurance company had quantum entangled indicators in their office tied to sensors aboard the ship that told them that the ship did not suffer a catastrophic field failure in FTL flight, and was still more or less intact. The yacht had FTL boats to carry off the passengers and crew to safety if it suffered less than catastrophic damage. None appeared. This being the case, the family claimed that it was either hijacked, taken by pirates, or suffered some other sort of non-destructive tragedy, and wanted the insurance companies to pay up. The insurance companies, suspecting fraud, given all the iffy circumstances, declined to pay.

The insurance case came to a head when a multi-million credit sculpture showed up for auction that was listed on the invoice of the missing yacht. It was purchased for a small amount at a pawnshop on a planet within the Inlopar fringe stars. Proof, the family claimed, that the ship had been hijacked or taken by pirates. However, when examined, the statue proved to be not the original, but a very well executed copy of the original piece. The insurance companies were insuring the original, and well, if it indeed came from the yacht, that would suggest that things were even more fishy than they had originally suspected. The adjudicator, sets out with his aides and our narrator follow the trail of this stature into the Inlowpar fringe in to discover what exactly happened to the missing yacht.

The story foundered not because I couldn’t figure out what happened, but because it involved too much time and space.

I feel very strongly that if one is going to set a story in the vastness of space, it should reflect that vastness. If the planets are a few hours away from each other, via worm-holes or whatever, they why bother with space travel at all? Especially if the planets become one feature planets, like the Star Wars’ desert, ice, and city planets. One might just as well set the story on an alien planet and move to different locales via cars, planes, or subway trains.

So for my space story, The combined Aeroday and Inlowpar star clusters needed to be at least as large as the earth was, several hundred years ago – back when it took months to travel to the far side of it, and information traveled only as fast as the ships or caravans. This, however, meant that yacht had to have disappeared several years before the events of the story for the case to reach this point. This made for a very “cold” case to follow and that made it hard for me to have the investigators to stir up much “hot” action to drive the story. Adding to this problem was that word of their investigation would travel through the star systems just about as fast they did. In a Philip Marlowe story, everything happens within a couple of days. The bad guys can learn of his involvement and can react within hours. A telephone call to Bay City could result in Marlowe getting sapped and ending up a prisoner in a shady rehab clinic. While I could have some sort of action like this happen on a planet, the trouble was that with the crime being so old, and the somewhat lawless nature of the planets involved, the bad guys would have no reason to react at all. The more I thought about it, the more it seemed that the story would end up just having our investigators going from planet to planet, finding and talking to people who knew a piece of the puzzle until the case was solved. Now, this is a fairly accurate description of many mystery stories, but in those, the readers can follow along with the detective, and detect with her or him since they know the rules of the genre. In the imaginary world of SF these rules are not known, so the reader would be simply along for the ride, mere observers. Which, in the end, I thought would make for a fairly boring story – for me to write, as well as for the reader.

The one lesson I took away from this experience was that it is hard, at least for me, to make a new and interesting space ship story, especially after having already written a 330,000 word space ship story. FTL ships are basically magic, so I suppose you could have it travel through some sort of magical space where things can happen to it, but for the most part the space ship in a story is just a device to move the story from one planet to another. And that being the case, I’ve rather come around to the idea of just setting stories on a single imaginary world where many things can happen to make journey through it as interesting as possible.


Posted by Charles Litka at 5:50 PM No comments: