It Has A Name

The name is aphantasia.

In the blog post where I talked about the failed covers of The Bright Black Sea, I mentioned that I could not picture peoples' faces in my head, or indeed, as I explored my mind more, that I could not picture anything clearly in my head. At best I'd “see” a vague impression, from which I might be able to piece by piece reconstruct an image. For example, I can probably draw a good picture of my house without looking at it, because I “know” what it looks like without actually “seeing” it in my mind, at least not as a complete image.

The reason why I mentioned this in the post was because I had considered a cover with characters on it, and rejected it for two reasons. The first was that I had no clear mental images of my characters. In my writing, you'll find few references to how they look, most are vague and you're free to ignore them, which reflects the fact that I don't have pictures of real people, people I see everyday and/or have known all my life, much less make believe ones. I could, I suppose, make a spread sheet of each character's physical characteristics, tall,/short, blond/black/brown/red hair, etc. and then just plug those features in when writing about that character, but since there appearance isn't important to me, I'd probably never think about doing it anyways.

The upside is that rather than try to compensate for this imaginative gap with a cheat sheet, I just outsource the job to you, my readers. You're free to imagine them anyway you like. Anyway they appear in your mind while reading about them goes. And that being the case, I didn't want to give them any physical appearance on a cover or interior art. They're yours to image.

A few weeks after that post, I came across an article that describes this condition of not being able to see images in one's mind, a condition called aphantasia.

I suppose there are degrees in every condition. I have no trouble finding my car in a parking lot, and I don't think I would even if it wasn't bright green. (My wife's choice.) I still can find my way around places I've visited in many years. And strangely enough, I'm pretty certain that I dream in fairly images, though that's a bit hard to say, because while I retain the impression of images, I can't recall more than an impression of those images – the condition reasserts itself in my waking mind.

I found this interesting. I had realized long before this article that other people could recall events much more vividly in mind than I could, so the condition itself was no surprise, only that it was a diagnosed condition. I don't see it as any sort of handicap. I'm a painter, after all, and most of my paintings are strictly from “imagination”. While my later acrylics are often impressionistic, my earlier work is much more realistic. (There are a few samples of this style on my DeviantArt site.) In all of them, I wasn't painting from what I could “see” in my mind, so much as taking an impression of a place,/time/mood and then engineering something like it onto the paper or board – and as often as not, into something different than what I set out to paint.


The one downside is that I don't get my money's worth as a tourist. I know I was there, but the only way to relive it, is to look at the photos taken. I can not replay the sights and sounds in my mind over and over again, like other people can. Seeing that I hate to travel, that's no big deal, though I wonder if this inability to relive the experience has something to do with my disinclination to travel. What's the cart, what's the horse? And since I can easily find plenty of photos of everywhere, and view many places on street view, going so place to take pictures, and putting up with all the wear and tear and stress of travel is not worth it.
Posted by Charles Litka at 8:59 AM 1 comment:

Email ThisBlogThis!Share to TwitterShare to FacebookShare to Pinterest
Labels: aphantasia

The Financial Realities of Writing

Early in May 2016 I posted a blog entry that set out my first year experiences in self-publishing. View it here:
http://clitkabooks.blogspot.com/2016/05/a-window-to-self-publishing.html

In it I listed download totals and reviews, and set them in the context of books sales in general, and ebook and self-publishing on Amazon in particular. I hoped at the time to suggest that books sell in far few numbers than most readers would suspect and that authors, in general, make far less money than most readers would suspect. Most writers who are not writing for hire, but working on their own writing projects, will not make a living on writing. It's a part time job, or a full time job that pays part time wages.

One takeaway is that they found less than 10,000 authors making more than $10,000 a year from paper, audio and ebook sales combined on Amazon. Amazon sells about half the traditionally published books in the US and about 85% of the non-traditional books, i.e. self-published or indie-published books.

In the comment section, the Data Guy, the fellow who compiles the data, set out to explain why there are so few writers who are making $50,000 a year writing (something like a living wage).


“Americans spend about $15 billion a year on trade books of all formats. After retailers and publishers take their cut, at most $3 billion actually lands in author pockets. Divided up perfectly evenly, that $3 billion could theoretically support 60,000 authors at the $50,000 level…

But instead, it’s getting divided up among at least 1,000,000 authors, if not more… including the estates and heirs of deceased authors. (I can see at least a million author names in our Amazon ebook data and top-selling Amazon print-book data, and that doesn’t even start to include the 32 million(!) lower-selling print book titles listed on Amazon right now, whose sales are too low to be captured in one of our scrapings.).
But lets imagine that there were only a million authors sharing the $3 billion right now. Which is an average of $3,000 each, if it were evenly distributed — but of course, it isn’t evenly distributed. Not even close.
It’s a Pareto distribution. And it’s one where the top 1% of authors — the top 10,000 — take home 50% of that $3 billion, making the average income among those top 10,000 authors around $150,000 a year. Here’s the thing, though: averages are pretty meaningless in a Pareto distribution. Because the top 1% of that top 1%, or just the top 100 authors — folks like James Patterson, Danielle Steel, Stephen King, Janet Evanovich, and the like — take half of the half. (Those 4 names alone account for 10% of it, if you believe Forbes magazine’s estimates.)
So the remaining 9,900 authors in the top 1% have to split what’s left: $750 million. And the next 10% down — or 1,000 of them — take nearly 50% of that, leaving only $375 million to be split among the remaining 8,900 top-1%-ers, bringing their average income to $43,000 or so. Which means that every single author below that top 10,000 — and the majority of those in it — are actually earning less than $50,000 a year from their writing.
All of which is a painfully longwinded way of saying that there just aren’t enough dollars being spent on books in the US to make “tens of thousands” of $50K-earning authors even a remote possibility.
Throw in foreign sales (again, concentrated in the top few thousand traditionally-published authors) and movie rights (which, again, are mostly going to the top 1% of 1% of traditionally-published authors) and we could maybe talk ourselves up to high single-digit thousands of authors earning $50K.
...Anyone who sets out with an expectation of earning a living from their writing is setting themselves up for almost certain disappointment. At best a low single-digit percentage of writers are ever able to. But that’s actually good news: before indie publishing became viable, the odds of doing so as an traditionally-published author were far worse — and for unpublished-but-querying traditional aspirants, basically infinitesimal.”
As a boy and man, I wanted to be a science fiction writer. I wrote several novellas, a fantasy novel, planned some others and YA mystery, but I lacked the never-say-die attitude needed to make it through all rejection slips into traditional publishing. Still, looking back, I may've dodged a bullet, given the odds and the meager rewards of success. However, In my old age, I don't need to tackle the publishing business, and I don't need to make money, so that for me, these days are the ideal days to write. The long odds of getting traditionally published and the meager rewards (and they're even more meager these days) no longer matter. I can do it purely for fun. And that's why, given my druthers, I share rather than sell my books.

Posted by Charles Litka at 1:44 PM No comments:

A Summer in Amber Version 3.1 released

Version 3.1 of A Summer in Amber is making its way out into the world. Thanks to daughter Nel, who highlighted the typos and missing commas she found while reading the story on her ipad and sending those notes on to me. With her help, I have eliminated a number of sloppy edits, and other typos in the first half of the Story. Stay tuned for Version 3.2, which will include the second half of the story, once Nel gets to reading that.

It does appear easy in iBooks to highlight any mistakes you find, which can then be easily emailed to me. In the email I only get just what is highlighted, so that if you highlight only the mistake, that, and the chapter it is in, is all I see, which can make some typos hard to locate. However, if you highlight several words before the typo to give me something to search for, I should be able to find and correct the mistake easily. I mention this only because if you would like to call mistakes to my attention, this is a very easy way to do it. I'm not sure how it works on the kindle, but it might work similar. The key, however, is to give the mistake a little context. I can usually figure out what is wrong on my own, so you need only to call my attention to the mistake to get it fixed.

Speaking of mistakes, I happened to be reading the back of my bag of potato chips the other day and came across this: 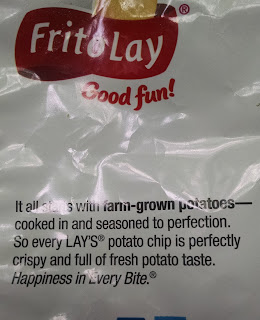 This is a photo of the back of a bag of “Lay's Classic Family Size!” potato chips. The blurb reads in part: “It all starts with farm-grown potatoes – cooked in and seasoned to perfection.”

I report this only to show what a year into self-publishing has done to me. Not only am I seeing the odd typo for the first time in a couple of books I'm re-reading, like for the third time, but I'm seeing typos on potato chip bags. The horror, the horror! It's like I can no longer ignore the little man behind the curtain… And I'm spending time thinking about whether it's “a while” or “awhile” while try to pretend it actually matters…

Just kidding. Proper grammar and correct spelling, like cursive writing, is vitally important if we're to remain a literate society. ;)


Oh, and one final note, I see that Amazon is now selling Some Day Days at cover price. Or perhaps I should say, "offering to sell". Good luck to them with that. In any event, that is Amazon's decision, not mine.

Posted by Charles Litka at 7:57 AM No comments: