I'm happy to say that I completed the alpha version of Hissi, K'raya, Py and the Mountain of Gold this morning – a 63,000 word section which includes three adventures, tied together by characters and place. The title is just the new working title of Slaver, Saint and the Bargemen of Daeri that I posted about early in December. It will be the second of three parts that make up The Lost Star's Sea (Vol 1). With it, we're 124,000 words into the story with one more section to write, and everything to revise and work into shape. Still, if all goes well, I should be able to write the third section, and revise the complete work in time to be published by late summer or early fall 2016, which would be a year after the Bright Black Sea was released. That said, I must admit that I have only a vague idea of what adventures and dangers Wil Litang encounters next. (Though I know how it ends.) But without words on paper, I can't promise any firm release date. I still have a lot of day dreaming to do. If I should find myself bogged down, I may still go with my original idea which was to publish these parts as a series of episodes until the complete work is finished. We'll see how the next few months pan out.

Long term, I'm thinking The Lost Star's Sea will be published in two volumes. In this first one, Wil Litang is introduced to the Archipelago of the Tenth Star, and slowly finds a new life within it. In the second volume, we'd then shake his life up again, challenging his decisions and perhaps bring back the unresolved story threads from the Bright Black Sea to be resolved, as well as mysteries introduced in volume 1. That said, I have no idea what this all means in terms of a story. Nothing has been determined as to where it goes and how it ends up, which is one reason why I'd like the first volume to be able to stand on its own, if need be. It may be some years before I tackle volume 2.

One of the great disadvantages to doing a sequel is that its readership is almost entirely limited to people who've read the previous book. Reading the Bright Black Sea will be essential to The Lost Star's Sea. While I'm very happy with how The Bright Black Sea has been received, both in terms of downloads and in reader reviews, we're not talking tens of thousands of downloads yet, so the sequel will appeal to a fairly narrow readership of The Bright Black Sea readers. It is possible that a new release might renew interest in the first book, but I'd not count on it. In any event, this is one of the reasons why I'd like to write something a little different now. I'd like to see if I could expand my readership by writing something that might appeal to people who don't read science fiction. Fantasy is actually more popular than science fiction these days, so I'd like to take a crack at that market as well.


All of which is to say that I plan to take some time away from Wil Litang. Perhaps just a week or maybe a month to make a start on that Edwardian fantasy idea I've been toying with for some time. I now have settled on the nose of a story, which might actually lead to more of the shaggy story that goes with the nose. I'm planning to get this first chapter down, develop the main character a bit and set the stage for a story, if only to prime the pump and see where the nose leads to next. Right now, I'll admit, I don't really have a story yet. But I do have a title, which is half the battle – Here & There, an Odd Door. I'm into weird titles at the moment, I guess. The basic idea is that the fabled Otherworld is closer than you think and that there are doors to it, you just don't see them. Not unless you have a key... I think I'll set it in London and England around 1910, though it may not be the London and England of our history. We'll see. It's all still up in the air. I've worked on my other stories all together, one way or the other, so I don't see that if I end up working on two stories – if I'm lucky enough to be able to have two stories to work on – that it would be a problem. Stay tuned.
Posted by Charles Litka at 6:41 AM No comments:

Slaver, Saint and the Bargemen of Daeri 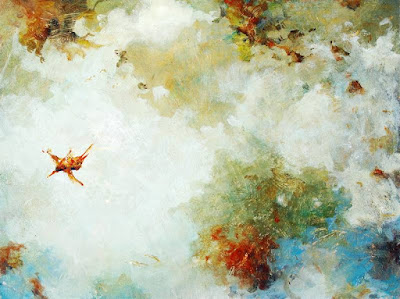 Haven't had much success coming up with the fantasy story yet – just a glimmering – so I'm continuing on with the next Wil Litang novel. Right now it looks like first of two volumes of The Lost Star's Sea, chronicling Wil's initial (mis)adventures within the Archipelago of the Tenth Star will consist of three sections. The first, Cin, Siss, and the Pirates of Temtre is done in first draft. I'm in the middle of the second section, Slaver, Saint, and the Bargemen of Daeri, which, with luck I'll have done by the end of the month, or the next. The third section I have vague plans for, but no definite plot yet. Still, I have time. If I can get that one done this winter as well (hate to waste all these dreary days trapped in the house) then I'll look to have the complete The Lost Star's Sea, Vol. 1 out late summer or fall of 2016. A novel a year looks to be about my pace, in a good year.
Posted by Charles Litka at 1:07 PM No comments: