2. A robot must obey orders given to it by human beings, except where such orders would conflict with the First Law.

3. A robot mus protect its own existence as long as such protection does not conflict with the First and Second Laws.

Upon reflection, adding “except for jerks,” to the end of the first robotic law may not have been prudent. But damnit! How was I to know that they think we’re all jerks!

Some twelve or fifteen years ago I had a brainstorm. I’d do a series of one panel comics a’la The Far Side, that explored humanity’s place in a robotic world, at times playing off of Asimov’s three laws of robotics. It would be called Life w/Bots. And over the course of two days, I came up with ideas for something like 50 panels with captions. Enough in hand to launch a series, with the idea of selling or syndicating the series to publications or websites.

All I need to do to get this project underway was to sit down and draw the comic panel to go with them. I have some talent for art. But it is rather narrow. My interest in subject matter is also rather narrow. And ambition is not my strong point. Plus, I can get discouraged easily. Oh, I have plenty of excuses. But long story, short, my brainstorm ran aground on the reef of actually having to draw the darn things.

Part of the problem was that the style of  cartoons I pictured in my head were the very intricate ones you might find in Punch Magazine a hundred years ago. Knowing that I couldn’t do that, I settled on a much simpler style inspired by the work of Cyril Kenneth Bird, who signed his work “Fougasse” which did appear in Punch in the 1930’s & 40’s. And I produced the three cartoons that illustrate this post in my approximation of his style. 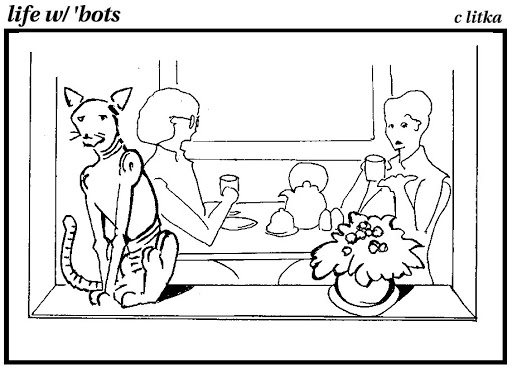 True, these newfangled robotic cats are easy to care for. But they're rather standoffish and independent. Snuggles, over there on my window still, is actually Agnes Willis’ robo-cat from apartment 731.

However, drawing them was only half the problem. In doing so, I discovered another problem – one I’ve noted in my paintings as well. That is the problem of “framing” a scene – getting everything you need into the frame of the comic. I don’t have a visual mind. I can only get sort of an impression of the scene I’d like to do. But all to often I’ve found that my impression just can’t fit into a frame. I can’t find a point of view to “shot” the scene, as a movie director would say, so that even if I knew what I needed to be in the panel, I couldn’t picture how to stage it so that everything fit in the panel.

Still, the project remains in my files, after having been transferred from my old Mac “Pages” program to my current LibreOffice program years ago. I hate to see things go to waste, so I’m thinking that I’m going to try to turn those little gags into very short stories, and see what happens. I may post them here on the blog, or publish them in an anthology, or both… If I get them done, and they turn out okay.

But in the mean time, here are three cartoons I did produce.

Art Flitter, the human foreman of Warehouse 73B, had, after three years of sitting at his desk with nothing to do, began to suspect that the small, sealed box labeled, “Do not open for 30 years,” which had been included in the “Welcome to Warehouse 73B” information packed that he'd been handed on his first day of work, contained an inscribed gold watch.

Posted by Charles Litka at 8:15 AM