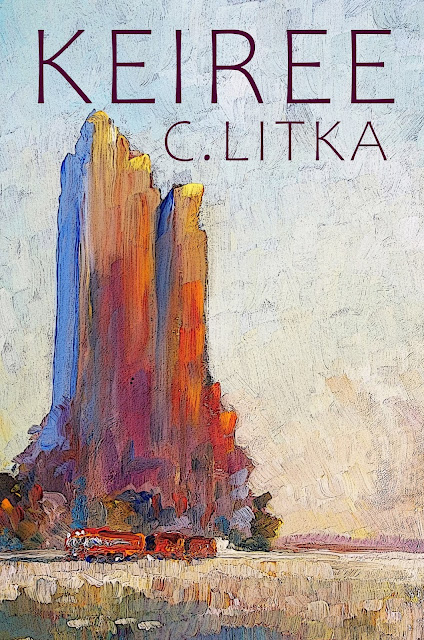 Yet another Mars story. It almost seems as if every writer of speculative fiction pens at least one Mars story. I suspect that one of the reasons Mars stories are so popular with authors is that to be even considered for membership in the Fraternal Order of the Aether, an author must submit a Mars story to the committee. It’s in their bylaws. So… Keiree is my Mars story.

Keiree is the story of the brilliant and wealthy engineer, Keiree Tulla, her chauffeur and love, Gy Mons… (Ssh! I’m getting to you.) ...and the silka cat, Molly. Deciding to escape scandal and start a new life on the distant planet of Fara V, they sign on as expedition crew members. Keiree as the director of the initial construction section and Gy, along with Molly, as a pilot with the advanced survey team. Upon completing their training, they were put in stasis pods to “sleep” away the centuries long voyage to Fara V. and stored on Mars awaiting their scheduled time to be uploaded to the vast settlement ship in orbit.

The expedition never sailed. After they were put in their stasis pods, but before they were uploaded to the settlement ship, a deadly plague swept through the solar system, laying waste to its planets and moons. Mars was not spared. Gy and Molly’s storage facility was quickly abandoned and then forgotten for seven hundred Martian years. When it was finally rediscovered, and Gy and Molly revived, they find that Keiree’s section had been stored elsewhere on Mars. Gy and Molly set out to find her, so they can face a familiar, and yet strange, Mars together.

Keiree takes place in the far future, after Mars having been extensively terraformed into an Earth-like world, but with its own unique quirks. The story is set in the fictional universe that includes The Bright Black Sea, The Last Star’s Sea, Beneath the Lanterns, Sailing to Redoubt and The Prisoner of Cimlye.

Keiree is a 34,000 word novella set on Mars. It will be released on 17 September 2020. The ebook will be free -- as usual -- in the ebook stores of Smashwords, Kobo, B & N and Apple. It will be priced at $.99 on Amazon and the equivalent price on Amazon's worldwide stores. I'll see if Amazon will match the free price of their competitors, but as you  may have noticed with my more recent books, they're not doing that much, or for long, these days. The mobi version of the story is available for free on Smashwords which can be side loaded and read on to a Kindle.

Posted by Charles Litka at 5:46 AM