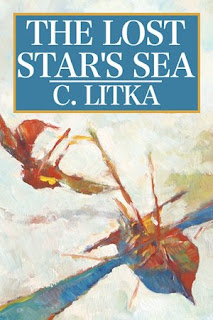 This decision came about after finishing the second draft of Part One. I felt disappointed in it after reading through it this last month. It just wasn't “it”. And if I felt this way, I'm pretty sure you'd be disappointed too. Luckily I don't think the reason is what I've written, but what I've not written.

I intended to split The Lost Star's Sea in two parts. The first would cover Wil Litang initial adventures as a shipwrecked spaceer in the endless skies of the Pela, and how he managed to survive and made a new life for himself in the Pela. Part Two would then shake that life up by bringing back the lingering questions and loose threads from The Bright Black Sea and questions raised in Part One. That, however, isn't going to work. I found that only half the story isn't enough, even though I had it ending a inportant story arc. Or maybe because of it, since that ending struck me as trite and cheesy. Too easy.

The thing is, this story continues the episodic pattern from the first volume, which is to say, a series of semi-self-contained stories. Part One has 3 to 5 of them (depending on how you divide them). This works best if each episode builds on the larger story arc. But if that larger story arc is not very evident, as it is in Part One, then it becomes just a flat recital of this adventure ant that adventure. (I'm not known for brevity in my writing, and this book will be no exception, evident by the fact that I'm 180K+ words into the story and am still laying the ground work, so to speak.) While I hope this series of adventures are interesting in themselves, they do not address the questions left hanging at the end of The Bright Black Sea and when I came to the end of my revisions, I felt sort of cheated – I'd been promised a story, but only given half of one. I'm not going to settle for that.

And if I felt that way, I could only imagine how you might feel. This is especially true since I've only come to realize that The Lost Star's Sea might not be the book you're expecting. I knew what I wanted to do with the next book halfway though writing the last one, but I'm not sure that I telegraphed that in the story. (Not that I wanted to.) So that if the story doesn't start out like you expect and then ends before what you expected ever appears, well, I don't think you'd be happy. I'm not going to risk that.

I realize that series writers do this all the time – stringing stories along, book by book for financial reasons. And readers, at least some of them, put up with this. I just came across a new fantasy series, Emperor of the Eight Islands, that is being published in four volumes – at $9.99 each for 270 page book – so that by the time readers reach the length of The Bright Black Sea, they'll have paid $40 for the story. This makes financial sense – assuming you can keep readers interested enough to reach the final volume, but my stories are not commercial endeavors (when I can help it), so I have no incentive to break my long novels into bite size pieces. I can afford to present them in the best way possible, as a complete story.

By deciding to publish the whole story in one volume, I now must begin daydreaming up what happens in the second half of the story, something I'd not ventured to do until now. It can be hard. When you're half a million words into a story, the characters no longer do what you want them to. They have character. And I'm a stickler for avoiding plot holes. Action must flow naturally. Characters may occasionally do ill advised things, but they can't do obviously stupid things just to make a nice scene. So coming up with a story involves a lot of “what-ifs?”. "Would they do that?" and then “Does it make sense?” I'm hoping to release the complete story by next summer, if all goes well. But you never know about that. It's the goal. Hopefully, it will be worth the wait.

Posted by Charles Litka at 2:50 PM