The Failed Art of The Bright Black Sea

For the last dozen years or so I've been painting landscape paintings. I've pretty much developed an impressionistic landscape style that is fairly unique. Not too popular, but unique. Which is what counts. This style, however, does not translate well into illustrations. It lacks detail and mine, at least often lack people. For A Summer in Amber and Some Day Days, I managed to do two landscapes, that while they're not really good cover illustrations, do at least set a tone for the stories. The Bright Black Sea has so far evaded my attempts to create a cover I like.

There are several reasons for this. First, as I mentioned, is that my style is vague on details, and most s-f book covers are big on details. Secondly, no matter how well designed the Lost Star is for it's environment, it lacks gee-galls and thingamajigs sticking out all over the place to make for an interesting cover illustration. The Lost Star is basically the most boring space ship imaginable, from every angle. It doesn't even have the fins like the old style rockets of s-f. Thirdly, being the author of the story, I know the story too well to just page through the book and find a scene that I care to do, irregardless of how important or unimportant that scene is in the story. A good cover might be one of the battle scenes, which have plenty of space ships and Star Wars type fighters. Throw in a bunch of explosions and you have a typical space opera cover. Except that episode plays only a small part of the story, and would be misleading, since The Bright Black Sea is not a military s-f book. I want to find something that represents the whole story, and that mostly comes back around to the Lost Star/Starry Shore. The boring old Lost Star without any thingamajigs.

Right now, the image I am using for my non-Amazon cover is this one: 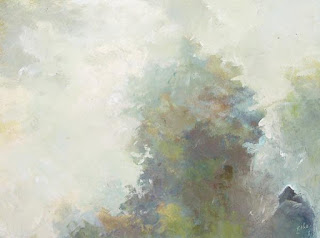 You simply need to inverse it, rotate and crop it get rid of that house in the corner and put in a few “nova” effects in Gimp and you have the cover – the Nine Star Nebula and a star or two.

I did, at one time, knock off some small sketches, but none turned out good enough to use: 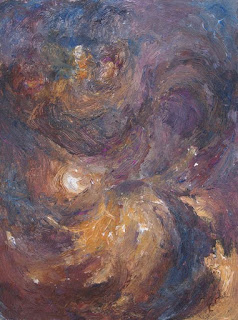 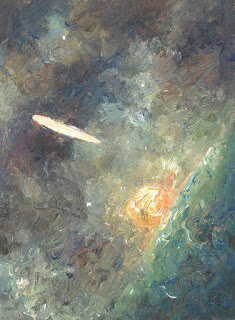 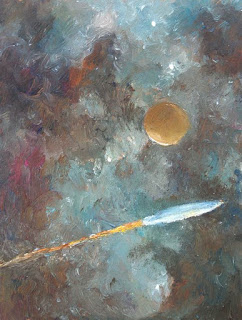 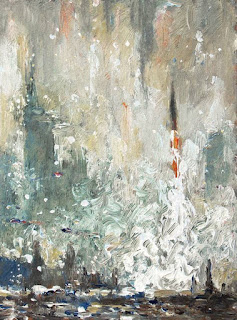 The four pieces above were all little 6x8" sketches.

I also made several attempts to do a cover with the Lost Star more than a speck in the painting, neither of them made the grade: 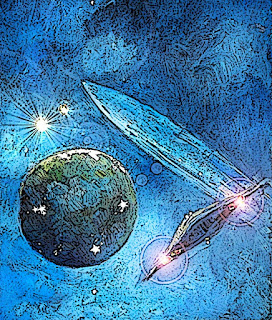 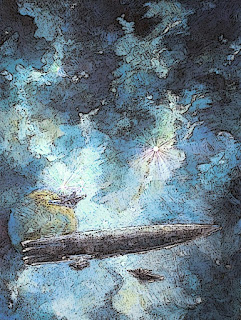 In these cases, I used filters in Gimp to give them some additional and some lighting effects as well. As I said, both turned out looking too crude and amateurish. The one I'm using for my Amazon cover is another painting using Gimp filters, but does not have a crude space ship in it.

Recently, I tried one with people instead of the ship -- a scene from the Lost Star's bridge. As you can see below, it did not go well. Still way too amateurish. Not professional looking at all. But there was one other problem, and for me, a greater problem -- I don't want to define how my characters look. I want to leave that up to you, the readers.

In part this reflects a quirk in the way my mind works. I can't picture living people in my mind. I recognize them, at least so far, but I can't picture them. I have a little bit better luck picturing photos of people, but still, it's pretty vague. Not surprisingly then, I have no images of my characters in my head, just vague impressions of them. I'd probably recognize them if I met them, but I can't picture them. So rather than just listing a bunch of characteristics for each that mean nothing to me, I keep my descriptions very sketchy, and you can ignore them if you choose. So by drawing for the cover, I was in some way defining them, which I do't want to do. These stories are set 80,000 years in the future and all the old earth ethnic types have long since been mixed and merged. Who knows what types have evolved in the long settled planets? The characters can look like whatever you want to look like. By making the cover below I felt I was compromising your freedom to imagine the crew of the Lost Star as you see them in your mind. As you can see, I tried to keep everyone as undefined as possible, and well, it didn't work out in any case. This image doesn't look like how I envision things, so it forget it after you look at it. Please. 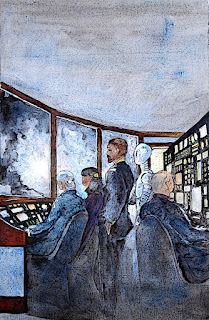 I haven't given up yet. 'm sure I'll make another effort or two. I might try the more graphical approach you see now days in covers. We'll see.
Posted by Charles Litka at 12:20 PM