Below is the post that I had planned to post yesterday. It is still valid, but with, let's say a "*" which I will add below.

Shadows of an Iron Kingdom, the third Nine Star Nebula Mystery/Adventure ebook is now on pre-release on Amazon at $.99, while the paperback version is available now, for $10.00. The ebook will be released for free on Smashwords and Google on 15 July 2021, and will make its way to other retailers for free shortly after that,

At a date yet to be announced, but sometime mid-to-late July, The Starfaring Life serial will be live when Amazon flips the switch on it Vella app for iOS. With those two releases, I’ll have cleared my desk of projects.

In the past 18 months or so, since January 2020, I’ve written and released four novels, two novellas and a short story. While this is not on par with the big time, mainstream producers of Kindle Unlimited books, it is, I think a pretty darn good pace. The key, of course, is the length of the novels. All four of the novels have word counts that range from 54K words to just over 72K words, with the novellas coming in at 34K and about 25K words each. It is a simple fact that the longer the story, the more moving parts you need to fill it. Developing all those moving parts is, for me, time consuming. As long as I have a story in my head, I can type it out at between 1,000 and 2,000 words a day in about four hours, split between two hour morning and an evening sessions. This means that it takes only an extra month or so of typing to go from a 60-70K to 100-110K word story. What takes the extra time is coming up with a more complicated story. In the past, my 100K+ word stories took between six months and a year plus to produce. But a 60-70K story takes me just two to three months to produce, once I have the story in mind, and with fewer moving parts, they are a lot easier to dream up.

The wild card, however, is that I like to fill several hours of my day typing – writing – so that if the daydreaming up of this new story takes too long, I might be tempted to pick up one of the many threads I’ve left dangling from most of my stories, and do another sequel. Guy Mons needs to move on from where I left him. Taef Lang needs to find a job. Wil Litang needs to be reunited with Naylea Cin, Ren Loh isn’t going to let Kel Cam just settle down and teach. I know that Rafe d’Mere and Kee will find a mystery to solve in space… But all these threads are just that – threads. I’d need to make a story out of them, which I don’t have a present.

*I had ordered a new mechanical keyboard for myself -- a new toy,  tool-- for all that work I've put in over the last 18 months. It was out of stock, and I hadn't expected it to be back in stock any time soon -- I figured they were stuck in some container in China. But, lo and behold, it became available, and arrived yesterday. And so  I have this new toy in hand and need to play with it. I got to thinking about one of those loose threads, and how I really want to fill up my mornings... I have at least 1/3, maybe 1/2 of a story in my head already, plus I sort of know what I want to do with the second half of the story, but, as usual, the devil is in the details. Still, there's no reason why I can't work on both stories, write one while continuing to dream up the second.

The bummer is that the "H" key on the new keyboard does not work... which means that my new toy, tool, doesn't work and will have to be replaced. Hopefully it will be replaced, but how much of a hassle it will involve remains to be seen, since I'm dealing with a Chinese company and it was shipped directly from China... Still, even without my new toy, I think I will continue to press on to see if I can't get the smaller project out this fall before starting typing on the big project. 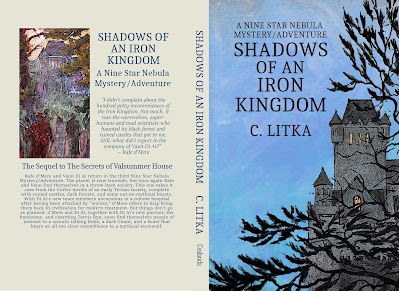 Posted by Charles Litka at 6:03 AM