Dog Days of the Blog

For the last several years I've written this blog primarily to provide supplementary and background information on the books I write and publish. I also use it to update the status of upcoming books, and occasionally post entry about the business of self publishing. However, The Lost Star's Sea, was the only book I was writing for the last two years, and with its publication, I now have nothing to post about.

Though I had, for the last year or so, been trying to come up with a new story to follow The Lost Star's Sea, I hadn't come up with any story I could get excited about.  And so, for the last half of the summer, I didn't anything to write. I found, however, that, after five or six years of spending the first two hours of my day, everyday, writing, the absence of writing left a rather large hole in my day. I missed writing. Writing for me is like playing with words, and the end result is less important than the process of writing. I missed playing. So several weeks ago I started writing two different stories on the flimsiest ghosts of a plots. I figure that with two stories in hand, I can bounce back and forth between them whenever I run out of ideas for the story I was working on and slowly push both ahead by keeping them fresh. And if that doesn't work, I'll start another one.

Now, at this point in time, I have no expectation of publishing either of these stories. I have only the nose of a story. To get a complete story you have to write it back to the tip of its wagging tail, and that is far from certain at this point in their development. For that reason, I'm going to keep these stories under wraps for now. If and when I have a first draft of one or both, I'll be back with concrete information on when they would see the light of publication.

This, however, leaves me little – well nothing – write about. I could write about self publishing, but that's old hat these days. The gold rush days of indie publishing are behind it. All the readers and genre open to reading and being read on ebooks are now found on ebooks. Any growth will incremental and with tens of thousands of new books being released each month on Amazon, it is a golden era for readers, and a brutally competitive marketplace writers in it for the money. A best of times, the worst of times thing. But I'm not in this for the money, and I expect to be writing everyday, and while I don't expect to have much to post, don't take the absence of posts as evidence that I've abandoned writing. There's no reason why I can't get a story from its nose to its tail in time for summer 2018, though, at this point it's not a given. Hopefully in a few months, I will be able to tell you for certain that there will be a new novel in 2018.

And as a down-payment on that promise, below is a sketch map of one of the stories I've started. Make what you will of it. 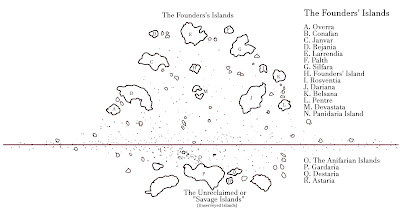 Posted by Charles Litka at 6:44 PM