River of Stars & A Psalm for the Wild-Built Reviews

Well, that was last week, this is this week in book reading. Last week it was books written in 1922 and 1959. This week we have books written in 2013 and 2021. And what a difference it makes. The 2013 book was Guy Gavriel Kay’s River of Stars, a fantasy set in a make-believe China, and Becky Chambers’ 2021 novella, A Psalm for the Wild-Built, which TOR sent to me for free to promote its sequel. The differences between the two week’s readings are quite striking. 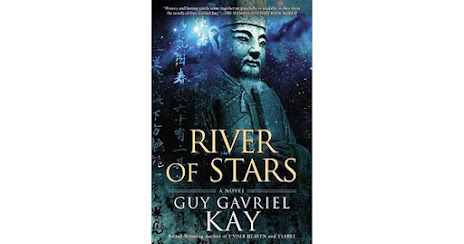 Note: I believe I read this book 6 or 7 years ago, since some of the scenes I read seemed familiar and I know that I read his first book in this setting, Under Heaven. Obviously, I don’t remember if I finished it, or not, back then. However, I forget books quickly, so that not clearly remembering if I read it only means that it wasn’t one of my rare memorable books.

Well, I didn’t finish it this time. I found it to be a mess, in some of the same way as the other Kay book I attempted to read back in April, Children of Earth and Sky was. Only in more ways.

Kay writes fantasies set in knock-off historical settings, in this book in 13th century China. In both books, he introduces a lot of disposable point of view characters, tosses in a lot of rather disjointed history, and skips ahead in time briskly -- at least the beginnings. In this book, the first 13% of the book covers maybe three, four, or more years between the scattered incidents he relates. Who knows? As I said in my review of Children of Earth and Sky, I have no doubt that he will tie at least some of the point of view characters together at some point. But due to their brief, disjointed appearances, I didn’t have the time to come to care about them, and so I had no interest in learning about their future lives.

One of the YouTube booktubers maintains that Kay is the best living fantasy writer. Other readers have praised his writing as well. I’ve read so little fantasy that I can’t comment on that. What I can say is that, I didn’t see what I consider great writing in this piece. I found his sentence structure rather ill-elegant at times. His info-dumping, which he does a lot of, was disjointed and hard to follow. Sometimes he was writing in present tense, sometimes not, and he even included a passage from long after the events of the book. In short, the writing was all over the place. The YouTube fellow suggested that he was experimenting with style at this period, which may well be the case. It didn’t work for me, nor, I gather, for him as well.

My bottom line; I didn’t really get much sense of ancient China from the portion of the book I read. I have read a fair amount on China, and watched a lot of their historical fiction/fantasy TV series, so I have my own feel for China, a feeling that was missing in the portion I read. I greatly dislike the use of assorted viewpoint characters who are not on stage long enough to care about. I can’t help but think that when authors break their stories into little pieces like this, they lack the confidence in the strength of their story, and so they make it into an intellectual puzzle instead. No doubt I am wrong. Still, I like stories that unfold like real life stories do in our real lives, not viewed from the eyes of a god, or as an artifact of creative writing. That’s just me. 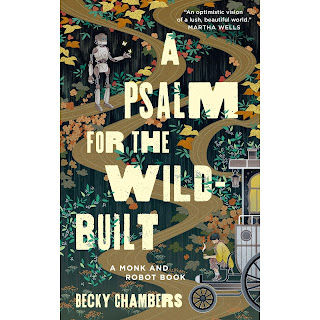 A Psalm for the Wild-Built by Becky Chambers – C

This is a novella length story is set on a moon whose industrial expansion almost destroyed its ecology. However, at some point the machines that were running the factories gained sentience, and were given their freedom, leaving human society behind. This event wrought a great changes in the society, resulting in the closing of the factories and society became much more pastoral, thus saving the moon’s environment. The story concerns a religious person named Sibling Dex who, dissatisfied with life in a monastery, decides to become a tea monk. This mission involved living a roving life, making the rounds of villages with a wagon pulled by an electric bike. In the villages Dex offers tea and comfort to people who in need a bit of both. After some years, Dex grows dissatisfied with this life as well. Wanting something more, but not knowing what, Dex sets out, on a whim, for a long abandoned monastic retreat. On the road Dex meets one of the free living robots, Splendid Speckled Mosscap, who has been tasked with seeing how the humans are faring since the sentient machines went their own way. What follows is a story of how Dex and Mosscap eventually form a friendship, despite Dex’s initial misgivings.

And what follows from that meeting and their growing discovery of each other is a philosophical exploration of… Now there you have me. I have discovered that I am not a deep thinker. I am content with the sparkling sea, with little interest or appreciation of  the depths which lie beneath the waves. And so while the two discussed many various things, my interest and attention waned. You may well find their discussions quite enlightening.

Becky Chambers writes the type of stories I should like. Which is to say that she writes stories with pleasant characters in smaller settings where the universe is in no danger. I finished this story – which is more than I can say for the first book of hers I tried, A Long Way to a Small, Angry Planet, but I can’t say I was enthralled by it. It was too simple and moved too slowly even for me. And while I did finish the story I don’t think I’ll be reading is sequel.

Posted by Charles Litka at 5:44 AM