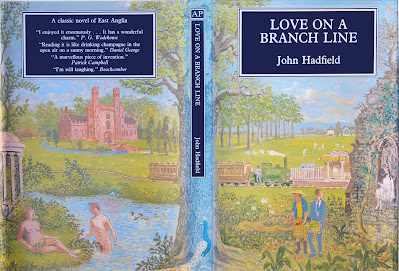 Love on a Branch Line by John Hadfield – B+

The story behind this book begins with a video on YouTube I recently started watching called “Eccentric British Comedy – parts 1 &2”( that you can find here.), and really enjoyed it – it seemed right up my alley. I stopped, oh, some 40 minutes into the show to figure out what it was I was actually watching, as the title went by without me taking much notice of it. It was Love on a Branch Line, and googling it, I discovered that it was a 1994 BBC mini-series based on a book by the same name. I googled the book, looked at its Goodreads ratings, and since P G Wodehous “enjoyed it enormously,” I decided to hold off watching the remaining hours of the TV show so I could read the book it was based on. Passing up some US paperbacks, I found the hardcover copy, the cover of which is above, at a British bookshop via ABE Books and ordered it – $20 with shipping. Well, you can’t take it with you or send it on ahead.

Love on a Branch Line is a light, humorous novel set in the English countryside of 1957. Our bureaucrat narrator. Jasper Pye, overhears his girl friend telling someone at a party that “Jasper is a bore.” Stung by this remark, he decides to quite his position to go to Paris and paint. However, he finds that his boss is sending him to investigate a remote branch of their Ministry of Information called “Output Statistics” which had been established during World War ll  in a country house on the border of Suffolk and Norfolk. Since then it had more or less been overlooked. However, with budget cuts looming, his boss wants to close that branch and Pye’s report will facilitate that. Plus, it will get Pye out of the office – it being a fresh situation, since, according to his boss, they all run the very real risk “of becoming a bit of a bore.” This comment is enough to send Pye on his way to Arcady Hall.

At Arcady Hall we meet a fine cast of eccentric English characters, from the lord of the manner who bought the four mile branch line bordering his estate when it was abandoned and now lives on the train that travels back and forth each day, with one of his daughter driving it while he dines and listens to old jazz recordings on his gramophone. We meet his three daughters, each either sweet or strange, or both, the pompous Professor who runs the Office and looks after Arcady Hall as if it was his own, along with an assistant deeply into cricket, and a secretary, plus various other local “characters.” Pye finds that he’s rather fallen down a strange rabbit hole – to a place where people don’t find him a bore. And so, over the course of a long weekend, he kisses and makes love to some of the daughters, plays some cricket, and undertakes various duties at the village fete for “fallen women.”

While the writing might not quite be up to Wodehouse’s, the story is sweet and strange, and nostalgic, probably even when it was written in 1959 – a story set in the long lost never-never-land of the English countryside. For a fan of Wodehouse, Miss Read, and D E Stevenson, it is a story, as I said, right up my alley. So now, I have the BBC mini-series to finish. What I saw of it was very faithful to the book, so I have high hopes.

As it turned out, I read two books this week, since Love on a Branch Line arrived from England far earlier than I had expected. Here is the first book I read.

I don’t like to travel, but I do like to visit places virtually. I’ve traveled (virtually) all over Europe in the cabs of trains with videos posted on YouTube. Books will take me to places as well. And I think each summer, I get the urge to visit Cape Code. And the author that takes me there, across a thousand miles and a century or more is Joe Lincoln. I’ve already posted a blog post about my collection of Joe Lincoln books here. So I won’t say more than this summer I visited Cape Code in the form of his 1922 novel Fair Harbor – for perhaps the third time.

It is one of his better ones, with all sorts of “characters” – which are a hallmark of his writing. The story concerns a disabled sea captain who is talked into overseeing a home for the widows and the unmarried sisters of mariners, in order to preserve the home from the recently widowed husband of the home’s founder. The judge who oversees the operation of the home is now close to death and fears that after spending his late wife's fortune and now likely destitute the widowed husband will seek to spend the endowment that pays for this home .He wants someone like Captain Kendrick in charge to prevent this from happening. The home is managed by a widow, though her daughter, the love interest, is the person who does all the real work looking after the place and residents. We meet the lady inhabitants of Fair Harbor, Judah, one of his old sea-cooks who’s always singing sea chanteys, the smooth-talking widower, and a host of other citizens of Cape Code in the 1870’s over the course of the story that winds its way to a happy ending, as all Joe Lincoln books do.

I like small stories of everyday life in another time and place laced with romance and humor. I read for escape, and when summer rolls around, its to a quint, long gone Cape Code that I like to spend some hours visiting – and revisiting.

Long story short, it was a good week for reading, having read two books that suit my taste very well this week.

Posted by Charles Litka at 6:48 AM