The Making of The Girl on the Kerb -- Part 1 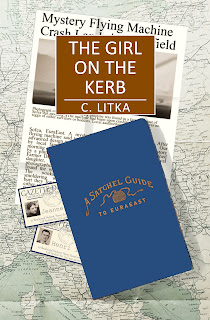 Even though the publication date of The Girl on the Kerb is likely many months off – think 2023 – I thought I might as well start a series entitled “The Making of The Girl on the Kerb” detailing how I managed to write another story. Which believe me, was far from a sure thing a year ago, or for that matter, even as late as the beginning of this year. Every story I write is my last story until it isn’t.

I probably have talked about my writing process in previous posts, though I can’t be bothered to go back and see. In any event, in discussing how this story came about, I will no doubt go into much greater detail as to how stories come to me, how they fail, and how they sometimes succeed. So on with the show.

The Girl on the Kerb is a Frankenstein of a story. It draws its plot and framework from at least three of my abandoned story ideas, one of which dates back to 2016, with a story entitled, Rust in the Dust. I wrote just under 4,000 words on that story before eventually abandoning it.

So how did Rust in the Dust and The Girl on the Kerb come to be? Usually all my stories start with a mood a feeling or a picture in my head. After that, I think about the characters I want to write about, and only then, do I try to develop a story with them and a workable plot. In all the various versions of this story idea, and there were several without names, the mood I began with was the mood of living in the summer of either 1914, 1939 or 1940 in England. Which is to say on the eve of a looming war, with the contrast of a sun soaked summer vs the black clouds of some unimaginable war on the horizon, impossible to entirely ignore. The story then would be set in summer, with some sort of conflict looming. I’ve read a fair number of books on that era, and especially 1940, with one that stands out; a diary written during that time: A Boy in the Blitz by Colin Perry. Plus I have a shelf of books and photo books from England of that time period, all of which have created in my mind a certain sense of place and time for that era – though probably not an authentic one, unless one goes with reincarnation…

So I had a time period and a mood I wanted to use to create a story. But…

Despite my desire to write a story set in a time like that, to write a story I first have to live the story in my head. I have to mentally “write” it without words – thinking about the story and its scenes off and on throughout the day and night, whenever I’m awake – usually for several months – before I even start to put words to it. And to be honest, I really don’t care to entertain such a dark and moody story in my head for that long. since the line between my life and my imagination is pretty thin. I didn’t care to have that imagined threat and gloom seeping into my real life. Still, some sort of light theme on that premise has continued to attract me, and to some extent, it plays a minor role in The Girl on the Kerb.

Next, because I don’t care to do detailed historical research, the idea of placing a story in 1914, 39 or 40 isn’t something I’d care to tackle. The other great downside to historical fiction is that you know how it turns out, unless you’re doing alternative history, in which case, why not just make up your own world and save yourself all that historical research? That, anyway, is my feeling on that subject.

I did, however, want to set this story on our Earth, and in Europe, to be precise. So I had to set it in the far future so that I could remake the world to suit my purposes. In the case of Rust in the Dust, after the eruption of the Yellowstone supervolcano, and an ice age. In short, in the distant future. While I did include the supervolcano eruption in The Girl on the Kerb, I skipped the subsequent ice age, or at least made it a minor one.

I really don’t like writing George Jetson SF futures. I like writing early to mid-20th stories – without having to do the research and fit it into known history. So, for that reason, I have a very advanced SF type civilization collapse, and then set the story a couple of thousand years after that collapse. In this way I can have a modern civilization chugging along in which to set the story, while using the collapsed advanced civilization as a source of mystery and potential conflict with the simple “What if?” some sort of working technology from that advanced civilization is dug up, and it was possibly being put to some use by someone in a way that would change the balance of power in Europe or the world.

That was the premise of Rust in the Dust, and I use a variation of this premise in The Girl on the Kerb. However, I never finished Rust in the Dust, and have finished The Girl on the Kerb, which suggest that I found ways to overcome the roadblocks that prevented me from finishing Dust. I did so by rummaging through my junk yard of other failed stories written after Dust, and grafted ideas from two other unfinished stories into the basic premise of a long peace threatened by an ambitious ruler with, perhaps, access to ancient technology. But before we get to that, I think I will explain why I abandoned Rust in the Dust in its first chapter.

But we’ll save that for next week. 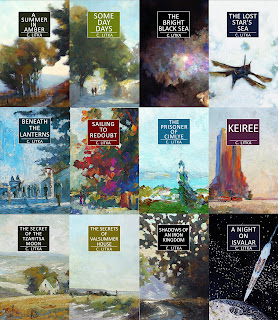 Posted by Charles Litka at 4:24 AM