Leviathan Wakes by James S A Corey A Review 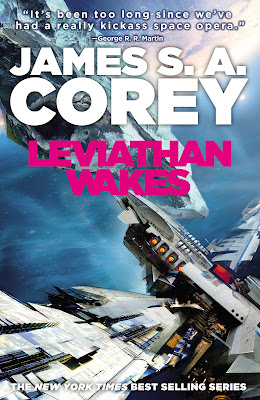 Each November I teat myself to a new tech device. This November that device was a Kobo Libre 2 ebook reader that I purchased mainly for reading ebooks from the library. Which explains the flurry of book reviews on my blog.

Well, I finished Leviathan Wakes, so it is at least okay. I enjoyed it more than Network Effects in that its characters were more fleshed out, and relatable. It was written in close third person, which is my second favorite style of writing after first person narratives. However, jumping between two points of view at critical points in one narrative is, in my old fashioned opinion, a cheap way to keep readers involved in the story. I tolerated that aspect of the storytelling.

However, upon finishing the story, I’m clearly going to need someone to explain the story to me. since it seems to me that, upon reflection, the story has a lot of moving parts that don’t seem to really connect together, though the story seems to imply that they should.

For instance; is the story about the war between the Outer Planets, Mars and Earth? Or is it about an evil corporation discovering an alien virus and perpetrating a horrendous experiment? And if both, how are they connected, or are they even connected? They don't need to be connected, but I got the impression that they are. Somehow.

It seems to me that the experiment on Eros could’ve been conducted much simpler without any war at all. (Just ship the alien virus in, stage or sabotage a nuclear accident to introduce the radiation, and let the zombies spread it through the asteroid. And you still could’ve had your detective story.)

And there are plenty of smaller questions that either I missed or were not answered. Questions like, who brought the alien virus to Eros? Was it the Mao gal or someone else. If it was the Mao gal, the timeline between discovering her and the outbreak seems pretty compressed. And pretty iffy.

Or why did the evil corporation’s ship attack the courier ship? Why did it set it up as a trap to lure another ship to the rescue? How could anyone be sure that the little clue in the transmitting radio pointing to the Martian navy ever be discovered, much less broadcast to the solar system, and anyone would jump to the halfcocked conclusion that the Martian Navy was behind it? And even so, that little clue would be enough to start a war? That alone seems to be a very long stretch.

What actual role in the story did the Outer Plant/Mars/Earth war actually play in the book? Was it just in the background  to set up further books, or was in somehow central to this story. If the story is about the alien virus, the war would be unnecessary. And if  it was for the eight books that have followed, why not introduce the war in the following books?

And why the stupid ending? A hard sf book suddenly changes into what? Science-fantasy? Why have an asteroid becomes a magical thing that moves, without inertia, at vast speeds with no apparent mechanism, or any apparent way that such a mechanism could’ve been developed by the organism. It seems like a half-assed way to get out of corner you’ve painted yourself into.

In conclusion – it was an okay read. I dislike grand scale stories, so that counts against this story. I'm not a fan of grimdark and what seems to me to be needles violence. But on the positive side, they did write relatable characters that balanced out the negatives. However, I do have to say that the story was overly long and it got a bit tedious at the end. All in all, I will not be continuing with the series.