First Draft of My Next Story Finished 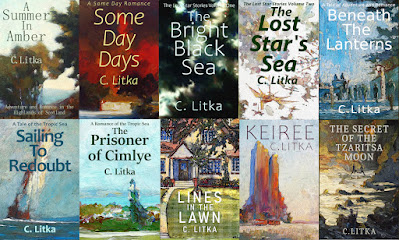 I am very happy to report that I finished writing my first draft of my next novel yesterday. For me, at least, the writing of the first draft is the heavy lifting part of writing stories. I’m always relieved when I have a complete story in hand, no matter how rough it might be.

I started writing on this story on 2 Nov 2020, so it’s taken me 89 days to write my 61,000 word first draft. It was rather a slow slog. Looking back to my files I can see that the first drafts of these books took:

It seems that I’m slowing down… And writing shorter books. But then, I’m also getting older. In the case of my new novel, I had a story, pieces of the puzzle, and an ending (that I ended up not using) in mind before I started writing, but fitting the pieces of the puzzle together took longer than I would’ve liked. I ended up having to take a break in my writing several times because I had caught up to the point where the pieces were still up in the air. Eventually they fell into place – I hope.

So what is my new novel about? Well, it is an old fashioned who-done-it style mystery story. Why a who-done-it mystery? Because I like to write something a little different with every story I write and I haven't written this type of mystery story. Since it is an old fashioned mystery, I had to make sure that, not only did the pieces fit, but that they created an engaging mystery. I will also need to make the dialog and characters as entertaining as I can, since the story does not have desperate adventures to keep readers engaged.

The working, and most likely final title, is The Secrets of Valsummer House. It is another “Nine Star Nebula Mystery” with most of the cast of characters from The Secret of the Tzarista Moon returning for this direct sequel. We find Rafe d’Mere still in Pine Cove several months after the events of the first book and still a toaster and bot repair tech. Lieutenant JG Vaun Di Ai returns to the Agrilea Co-op, this time as a mere an intelligence analyst 3 “on a field trip” as she puts it. She’s been tasked with filling in some blanks, ticking off some boxes, and following up a few threads related to the events in the previous story. She has been strictly ordered to only tick off boxes and fill in blanks on the forms, or risk her Patrol career. Along with her return comes a rather mysterious robot in a crate for an owner identified only by a code, as well as a mysterious lady. Mix them together with the pirate prince of the Seven Syndicate, and you have the The Secrets of Valsummer House.

With the first draft done, I'll now go back and read through it several times, adding and playing with words to polish it up. I enjoy this process much more than writing the first draft. Given the nature of this story, I’ll need to make certain that my writing is as entertaining as I can make it, since it will be as important, if not more so then the mystery. This process will probably add between two to three thousand words to the final version. I expect the second and third drafts will take the better part of February,  if not longer, to complete. Then the manuscript goes out to my beta readers for proofreading. At some point I will also need to work up a cover for it. So all in all, I expect to release The Secrets of Valsummer House in late March or early April 2021. Stay tuned for more details.

Posted by Charles Litka at 4:39 AM