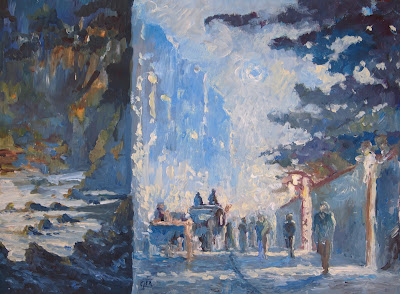 With a new book coming out, hopefully, by early December 2020, I needed to create a cover for it. Now, I’ve whined in past posts about what a challenge covers are for me, so I'll just say that sometimes they’re fun, but these days they’re just work. However, I’m cheap, and not all that fussy, so I’m my own cover artist. And I just have to lump it. The upside is that I own everything about my creation, from soup to nuts.

For this new story I faced a real problem. All the characteristic scenes that I could draw upon for inspiration take place at "night", and mostly in an old forest, giving this old landscape painter very few options. Plus, given the story’s narrow focus, I’d probably need to include people in the painting as well. Which I’m terrible at.

The lead photo, above, includes my first effort on the 8” of white space leftover on the left of the sheet of paper I used to paint my new cover for Beneath the Lanterns. Which shows you just how enthusiastic I felt about the project. I could imagine a lot of scenes to paint, but I haven't the talent to paint them, so I had to go with something I could do.

The scene I chose takes place in a cliff lined hollow, in darkness. However, at some point there is light flooding from a large cave, that I could use to banish the blackness. As you can see, it pretty much sucked. For my second attempt of the same scene, I tried a different painting technique, a watercolor approach. Below is this second effort. It sucked as well. 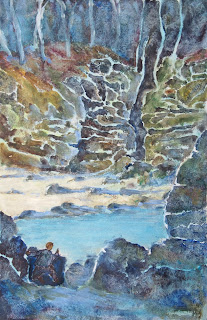 I took quick photo of this version in the bad lighting on my drawing table just to see if it was fixable in Gimp using my usual cheats. It wasn’t. So it was back to the drawing table again. On the off chance I could do something with the first version, I took a picture of it as well, and opened it up in Gimp. Serendipity struck. 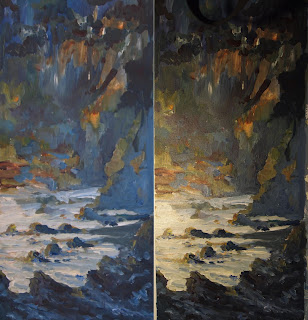 As you can see, the uneven lighting worked in my favor. The lamp was just above the bright part of the painting, so that area came out lighter than the rest of the painting, giving the painting a glow just where it needed it. And it shifted the color towards the yellow, resulting in something that I found promising. Using my usual cheats I made the art look like it was out of some old school adventure magazine look to it. Great. But.

But, I need some people in it. They could be small, but I needed some sort of action. So I got out my “How to Draw Comics the Marvel Way” book and sketched out a couple of figures. Even with the book, they were bad. Note the theme running through this post. I tried them out -- the ones on the left-- and then decided just to find some clip art runners and trace over them for my figures. Those are the figures on the right.

I photographed them, sized them, and then added them to the background art, along with another figure crouching in the foreground, using a "mask" to make the white spaces around the figures disappear. Voila! I considered adding a few explosions of plasma darts using tools in Gimp, but decided that they’d look out of place, so no one is firing their darter at this moment.

But I still wasn't done. There was the title and author to add. I’ve pretty much settled on The Secret of the Tzaritsa Moon as the final title, rather than The Tzaritsa Moon Mystery, or The Mystery of the Tzaritsa Moon, my other candidates. It’s rather wordy, but old fashioned sounding, which is what I like about it, since it suits the story. It does take up a lot of space on the cover, if I want the title large enough to be readable on the little thumbnail. I could make the first “the” and “of the” smaller, but at best I’d still have at least four lines, one of which would be only marginally smaller. With nothing much to gain by mixing sizes, I think I’ll keep all the words the same size. It’s not like they cover anything essential. So, behold, the likely final cover for the paperback version of The Secret of the Tzaritsa Moon. The ebook version has the title in a larger font to make it easier to read in thumbnails. 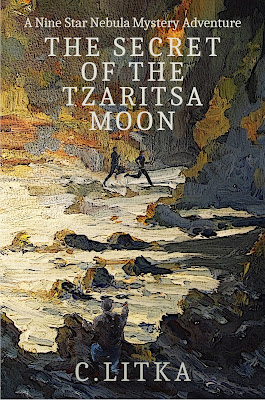 I'm finishing up my second draft of the story, and hopefully my third read through will produce only minor changes and so be ready for proofreading and my beta readers in November. If it all works out, The Secret of the Tzaritsa Moon will be released at the end of November 2020 or early December 2020. I'll be talking more about the story shortly. I will say this, I plant to write a second mystery with these characters and setting as soon as my work is done with this story.
I may not be having fun painting, but I am having fun writing! 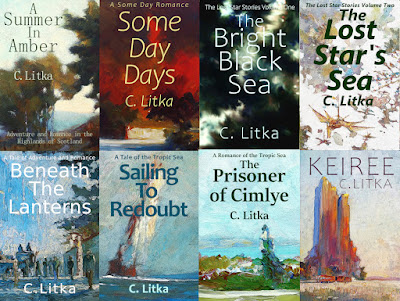