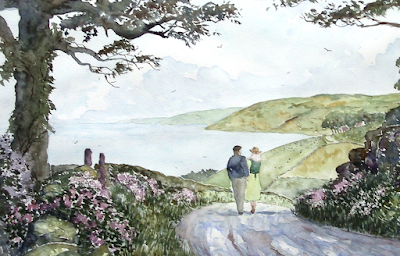 I am happy, and much relieved, to be able to announce that I have in hand the first draft of my next story, The Prisoner of Cimlye.

I set out on 1 February to get the first draft written by 29 February, and I made my deadline with more than an hour to spare. As I have noted in this blog, it has been a struggle for me to come up with a story that I liked enough to finish, so I am happy to have actually finished one.

I was able to achieve this remarkable feat of writing a story in a short month, not by some superhuman effort, but by the fact that I had set out to write a novella length story – of some 30,000 to 40,000 words in length. The current word count of the first draft is a little under 42,000 words, which actually puts it into the novel category. Be that as it may, it is a short novel, less than half the usual length of my stand alone stories, though I expect the word count will grow to around 45,000 words before it is all finished. Instead of cut, cut, cut like you’re supposed to do, I flesh out the scenes with the stage dressing that I don’t bother with the first pass through.

The Prisoner of Cimlye is an epilogue to Sailing To Redoubt. It is not ambitious enough to be called a sequel. It is just a story that ties up most of those loose ends that I left dangling at the end of Sailing to Redoubt.

I tell stories about ordinary people caught up in extraordinary adventures. I draw the story to a close when those extraordinary adventures reach their conclusion, and the characters move on to a more ordinary life. While I leave the possibility open for another set of adventures, they are optional. I would’ve liked to write a full sequel to Sailing To Redoubt someday, since I loved the characters. However, I came to feel that it would be impossible to write a story that would even equal what they discovered in Sailing To Redoubt. And since I like to keep my stories grounded in reality, I couldn’t bring myself to have Taef Lang find a lost civilization every time he turned around, like his hero Zar Lada. Plus, when I looked to the sisters Raah and Lang’s future, I didn’t see more sweeping adventures. Which is not to say their lives would be uneventful, but I would not be able to make them into an adventure story.

Still, I had all those loose ends that I had hoped to tie up some day. So I decided just to write a story that did just that. No pirates, storms, or impossible villains, just a story that takes up their lives six months after the end of Sailing to Redoubt. In it I recount what had happened to them since the end of that story, and what needs to be done to start their new lives. It is a quiet story, far closer to the literary end of the scale than to the adventure book end. I rather doubt that this is the sequel most readers would have chosen, but it is the one you’ll get, if all continues to go well. And if it does, expect to see it out sometime in May, 2020. Stay tuned for more updates.