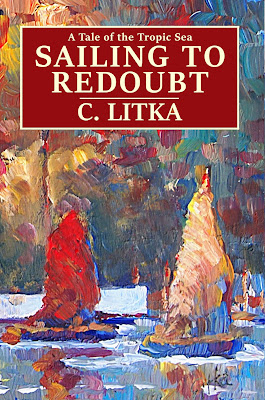 I am happy to announce that my 2019 novel, Sailing to Redoubt is now available on Smashwords for FREE, as usual. It should be showing up on Apple, Kobo, and Barns and Noble in the next few days. I will be releasing it on the Google Play Store on March 15th, and will release it on Amazon for $.99 within a week or so, and hopefully get them to price match my FREE price within a day or two after it is released. I will, however, be releasing the trade paperback version via Amazon on March 15th or 16th if all goes well.

This story is set in the same "universe" as The Bright Black Sea and The Lost Star's Sea. It is a story of a world settled by slower than light speed colony ships dispatched from the long settled Terran solar system. Unlike the worlds of the Nine Star Nebula which had been settled tens of thousands of years before the story took place, Dara lll is a much younger settlement; only about 5000 years old. It, however, suffered a great setback within two hundred years of the Terra colony ships' arrival so that most of the advanced technology from Terra was lost.

Under the Lanterns was also, in fact, also set in that "universe" as well, though it was a much older Earth colony that suffered a catastrophic collapse long after it had been settle.

I had a lot of fun writing Sailing to Redoubt and the writing went very smoothly. I began it early in October 2018 and finished the first draft right on schedule, Christmas morning. I took a week off, and finished the second draft by the end of January 2019, and the final draft in mid February, after which it was proof and beta read, hopefully finding and eliminating most of my many mistakes. Thank you, beta readers!

I hope that you will enjoy reading it as much as I enjoyed daydreaming it up and setting it down in words.

Posted by Charles Litka at 6:06 PM