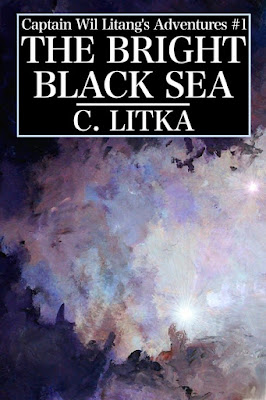 Version 3.3 (10 May 2016) of The Bright Black Sea is now available on Smashwords and Amazon. In the coming days it will trickle down to iBooks, B & N, and Kobo as well. I had hoped that version 3.0 would be the final one, but, alas, it proved not to be the case. However, thanks to R. Carlos, who read the story on his ipad, noted the errors he found and sent those notes along to me to fix, we now have a significantly better version. Between his 180 items, and going over the story again with MS Word's spell and grammar checker, I've squashed something like 200 “bugs” in the text. I'm sure that's the last of them. If you can prove me wrong, please do so. Send in any typos you find from version 3.3 to me at cmlitka@gmail.dom

I'd like to do print editions of my books, but I don't want to go that route until I'm confident that they're not riddled with typos. I gather print editions generally don't sell all that well, but I'm not in this for the money, so that doesn't matter. What matters is that I'd have print books, which would greatly simplify my Christmas gift giving… But this depends on how confident I am that my print books will be professional enough.