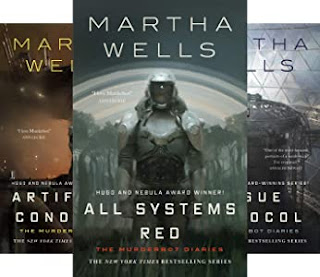 If you agree to  receive TOR Publishing’s promotional emails, they will offer you a free ebook every month or so. Usually the books offered are related to that particular author’s newest release. I signed up a year or so ago, and thought I’d just write mini-reviews of some of the books I’ve received through this program – in alphabetical order of Author.

Victories Greater that Death by Charlie Jane Anders. This is a YA or a Middle School sf title, I’m not sure which. It has a high school girl as the main character, which almost seems to make it a middle school story. There was nothing in the first chapter or so that I read that seemed inappropriate for junior high readers, at least judging from the fantasy books my granddaughter reads. I’m not into YA, or middle school books --  the writing is too simple, and HS characters don’t appeal, so I called it a day after the first chapter or so of this book. The Haunting of Tram Car 015 by P Djeli Clark This novella was... okay. Set in an alternate history where supernatural beings have been released into the world, to aid and annoy people, it had an inventive premise and world building – a lot of promise. But seeing that it was only a detective story novella, it would be hard to fully realize the full potential of the premise. And I don’t think it quite did. We’ll see what he does with full novels set in this world. (On an unrelated note, why is this paragraph's spacing different than all the others, seeing that it is just one of the paragraphs in the whole essay that I copied and pasted onto the blog page? It's a mystery to me. The working of a Jinn?)

Tooth and Claw by Jo Walton A story with dragons as characters. I didn’t connect with the characters, which is important to my reading experience. Called it a day after a chapter.

Hammers on Bone by Cassandra Khaw Another novella. It featured such  an over-the-top hardboiled PI story writing style that I didn’t know if it as meant to be read as a satire or straight. In either case, it was annoyingly badly written. All of the characters, including the PI narrator were unpleasant. I don’t spend my time with unpleasant people if I can help it. Quit reading at the 20% mark. 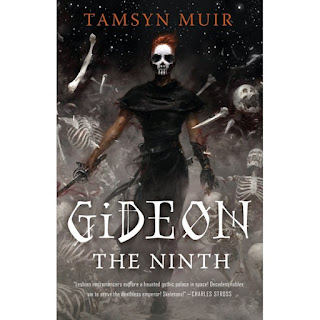 Gideon the Ninth by Tamsyn Muir I actually believe that I read the first chapter on the TOR website when the book came out, and only downloaded the complete book when it was offered as a free book just before the release of the second book in the series. Much talked about. Very weird. I might give it a bit more rope at some point. Or not.

A History of What Comes Next by Sylvain Neuvel The introduction has the narrator killing her loving husband of 20 years on a transatlantic ocean liner by sticking a pen up his nose and into his brain and throwing his body overboard because he read something he wasn’t meant to read, discovering what she was (a mystery). If this is the type of  (cheesy) intro that hooks you into a story, this may be your type of book. It repelled me. As I've already said, I don’t care to spend time with unpleasant people in life or fiction.

The Way of Kings by Brandon Sanderson. I’m not much of a lad for fantasy these days. This one starts out with a prologue set on a bloody battlefield with some immortal warriors, and then jumps 4,500 years forward to recount an assassin's attempt to kill a king using magic. Another book with an unpleasant character as the main character in the first chapter. Not my thing. Plus, I can’t help but think that if you allow magic in a story, you can make up anything you want or need for your plot, because, you know, it’s magic. That’s not my thing. I like some underlying basis of reality. DNF this one at the 1% mark (but its a long book...)

Murderbot, the first 3 novellas, by Martha Wells. I reviewed these stories in some depth some time ago, so I’ll just say that I enjoyed them, not as much as many people seem to, but they were the best of the lot so far. Have the first novel on order from the library.

The Traitor Baru Cormorant by Seth Dickinson Another fantasy novel in which I didn’t connect with the characters. Plus, I gather that the story is one of those grimdark ones, so I called it a day after a chapter or two. The Unspoken Name by A K Larkwood Yet, another fantasy. Clearly fantasy is far more popular than science fiction, given the samples TOR gives away when publishing a new story by the author. In this case, I read the first chapter and put it down, undecided. I’ll give it some more rope, but I just haven’t felt any great desire to return to it yet. We’ll see.

I still have a number of books to sample, but nothing very enticing. There are a couple more fantasy books, including Gardens of the Moon, by Steven Erikson, which I gather is another big name in fantasy. Plus some YA titles that are probably not worth my time.

As you can see, I’m a very fussy reader – darn hard to please. I have, however, downloaded a lot of old books from the Gutenberg Project, as well as my own books, on my new ebook reader so I do have a lot of potentially enjoyable books choose from.

Posted by Charles Litka at 7:23 AM