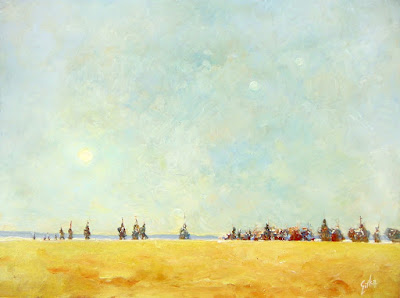 I’ve finished the first draft of my 2018 fantasy novel tentatively titled The 4th Daughter. The first draft came in at about 117K words, and when the dust settles after my revisions it will likely be around my target length of 120K words – about the length of A Summer in Amber.

My plan is to spend as much time this summer as I need making my revisions. Putting words on a blank screen is the hard part of writing for me. Going over those words and tweaking them is the part of writing that I really enjoy. I’ve a feeling that if I spend my usual two hours a day writing, I will likely be done with my revisions well before the end of summer. I need to draw a map or two, and paint several possible paintings for the cover art, but those projects shouldn’t hold up the show. Once I’m satisfied with the story, I will send it off to my proof and beta readers for their input. (If you would like to volunteer to read an almost final version of this story prior to publication, just drop me an email and I will put you on my beta reader list.) After any revisions inspired by my beta readers, I plan to publish it as both an ebook and as paperback book. The ebooks will once again be free, where possible. My original target release date was in the October- November, 2018. However, with the first draft done, I might be able to push the release date up a month or so, if all goes well.

This time around, the story is my take on a fantasy. I’ve read my share of fantasy books over the last 50 years, but I can’t claim to be a great fan of fantasy. I love Glen Cook’s Garrett PI series. For more traditional fantasies I prefer the ones set in an alternate-China setting. These days, however, I must admit that most fantasy stories no longer appeal to me. So why did I write a fantasy? First, I wanted to write something a little different. I also wanted to write something that might attract the attention of a new group of readers to expand my readership. And finally, I took it up as a personal challenge to see if could I write a fantasy story without using all the common fantasy tropes that I dislike – their vast scales of time and action, the endless conflict between the personified forces good and evil, light and darkness, the use of magic, all the various gods and other mythological creatures, and all their darkness, blood, violence, and death. And I must admit I had fun trying to turn as many of those tropes on their head as possible. For example, I have no evil forces in the story – a few ruthless and bloody-minded people, but none that are essentially evil. For the setting I have created an imaginary world, many centuries after the fall of a technologically advanced civilization. The story takes place across a sprawling steppe empire with technology at a horse, sword, and oil lamp level. However, more advanced technology – trains, electric lights and oil, steam, and electric motors reinvented with the help of relics left from the “Elder Civilization” – are beginning to be introduced from a neighboring nation. The story centers around the title character, Ren Loh, the fourth (and unnecessary) daughter of the Empress of Jasmyne and Kel Cam, a historian from that advanced nation. Since I hate blurbs that are a synopsis of the story, I’ll just say that it follows my usual pattern: a small scale, cozy story of adventure, travel, and romance.

Well, that’s how things stand as of today with The 4th Daughter. Stay tuned for more updates.

Posted by Charles Litka at 7:10 AM