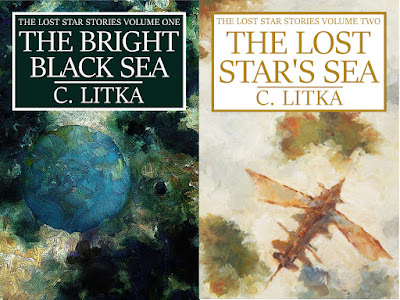 Both the revised edition of The Bright Black Sea and its complete sequel, The Lost Star's Sea are now available for free on Smashwords and for $.99 on Amazon. Once The Lost Star's Sea makes it to iBooks, Kobo and Barnes & Noble, for free, I'll see if Amazon will match that price.


However much the river winds, it finds the sea at last

It has been a five year journey down that winding river for me in the dreaming and writing of Wil Litang's story. It began with the realization that most of the stories I enjoyed in my youth didn't quite cut it for me any more -- they seemed thinly plotted and populated with cardboard characters. I wanted more from a story. And that if I wanted an old fashioned story with something more, I'd have to write it myself. I gave myself a challenge -- if I was going to write an old fashioned science fiction adventure story, I'd go full retro -- no faster than light drive, no "artificial gravity." No, I'd go full retro, full Tom Corbett, Space Cadet, with rocket ships and magnetic space-boots. But since there are no longer jungles on Venus, nor ancient ruins in the sands of Mars, I'd have to set my stories in another solar system. I created the Nine Star Nebula to give myself plenty of worlds of wonder to imagine. 675,000 words later, the story of Captain Wil Litang has run its course. I may return again to the Nine Star Nebula, there are still hundreds of worlds to visit and perhaps stories to tell. We'll see.
Posted by Charles Litka at 7:17 AM