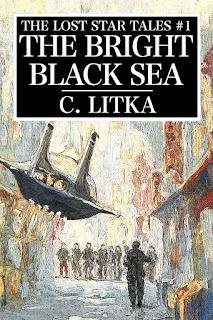 I've released version 3.4 of The Bright Black Sea. I would like to thank Walt for pointing out some typos that remained in version 3.3. I corrected those as took the opportunity to add a few sentences to deal with a couple of small things issues that I wanted to address.

The first was that as the story evolved, medical technology sort of evolved as well – and I had Captain Miccall dying on page 1 while at a full medical center. I added a sentence to explain that – Miccall was old, over the "Unity Standard" life span of 200 and a decade or two more years. This life span is limited by biological factors and the ability of the med-machines to manipulate older cells. And perhaps by Unity policy as well.

I should mention that the human specie in these stories, which are likely set some 80K years in the future, are “homo stellar” rather than homo sapien. In addition to being far more tolerant of weightless conditions than current humans, they have a far more robust body and immune system in order to tolerate a wider variety of non-Terran worlds. I would assume this was done by design rather than by evolution. I should acknowledge that by keeping my characters very human and familiar, in effect, turning a blind eye to 80,000 years of social and technological evolution, I'm cheating. The humans 80,000 years from now, if they exist, are likely very different from us – but I have no interest in exploring just how.

The second place I added a few sentences is where the Lost Star is accelerating on it's interstellar voyage to Zilantre. I have them accelerating to “Mark 7”, more than twice as fast as normal, and so the pseudo-gravitational effect of inertia would be something like twice what than they were accustomed to during normal acceleration and braking. I wanted to mention that effect in passing. While I tried to keep my cheating with physics to a minimum, I did not go so far as to calculate just how fast the ship needed to be going, and how fast or long it needed to be accelerated to reach that speed. From my research it seemed that you can get pretty far, pretty fast by accelerating at 1 gravity for extended periods of time, so I don't think it would have been much more than that, it's just that being used to free fall, any gravity was a pain for spaceers – though being homo stellar, they could easily adopt to it after prolonged periods of weightlessness.

Again, thanks to Walt and all the others who have helped make the story more enjoyable for the readers that follow them. Once The Lost Star's Sea is nearing completion, hopefully this coming spring, I will be putting out the call for volunteer beta readers. I'll offer more detail when it's closer to the time, but if you think you might be interested, just email me at cmlitka@gmail.com and I'll put you on the list to get the details.

Posted by Charles Litka at 2:48 PM