A Note on Fauna 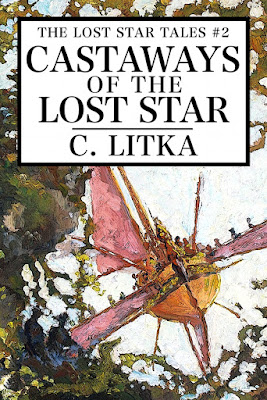 One of the Pela's any sorts of feathered fauna, a “sentry serpent” first appeared in The Black Bright Sea. In the first edition of this story, the sentry serpent was incorrectly described as a snake rather than as a serpent type of dragon. I regret this error. I can only claim that term “sentry serpent” led me to assume the creature was a snake rather than the long, Chinese-style " serpent dragons" of the Pela. That, and the great distance from which this story originates – untold numbers of light years and perhaps 80,000 years in the future. At the time I rather wondered how this creature could move – my inaccurate description had it moving by a combination of wiggling and expanding and contracting it's feathers never seemed to make much sense. And so on further investigation I discovered my mistake.

This mistake was corrected in later editions of the story. (Non-Amazon editions can be updated with new editions from Smashwords and iBooks. Newer editions, in addition to this correction have many typos corrected as well. Highly recommended.) 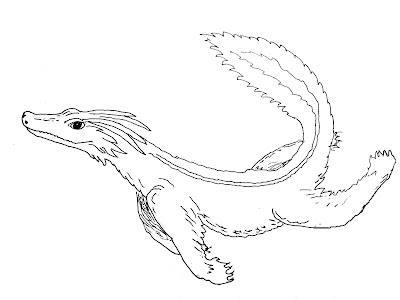 The actual sentry-serpent, or Simla dragon as it is know in the part of the Pela that the Castaways of the Lost Star takes place in, is a serpent dragon which looks much like a rather slim, feathered crocodile. (See the quick sketch above.) Simla dragons move in weightless conditions much like earth crocodiles swim through water, using their tail, with it's feathers extended to create a broad paddle, and with a little help from their legs.

I mention this because that a Simla dragon is a character in the Castaways of the Lost Star, and if anyone reads that story from the first edition of The Bright Black Star, may well be confused by the metamorphosis of this sentry-serpent into something rather different.