In a printed book I would have this information in the front of the book where a reader could easily flip back and consult it. I've found that in ebooks, however, that it isn't convenient to go back and find the right page, so I'm posting the information here where it can be download and printed out, if you care to have it on hand. 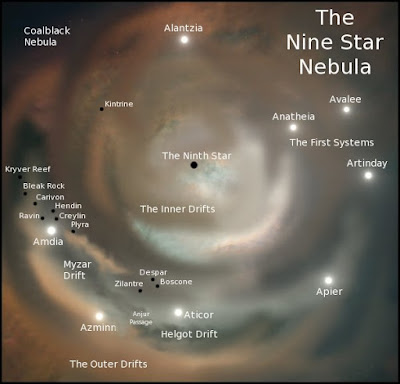 The Inhabitable Planetary Belt of Azminn
Below is a diagram of the Azminn solar system showing it's human inhibitable planetary belt and the relative position of the 21 planets that circle Azminn in this belt. (At the time of the story, relative positions shift over time.) The size of the planets are drawn to indicate importance & population rather than the actual size of the planets. The Captain of the Lost Star takes place entirely within this system. 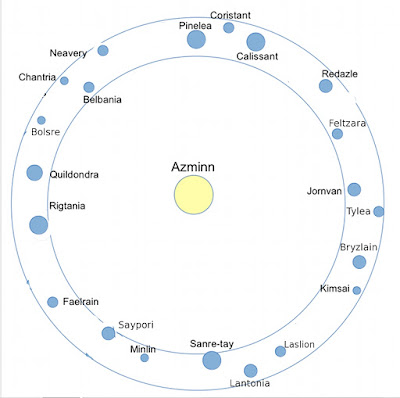 A Diagram of the Interplanetary Freighter Lost Star

Below is a diagram of the Lost Star. I have no working knowledge of computer drafting, so this diagram is hand drawn, and rather crudely at that. Sorry. I made the Lost Star very utilitarian, a no-frills tramp space ship. The unexpected result of having a very plain ship, was that I found it impossible to come up with a cover illustration that was at all interesting using it. And I did try. 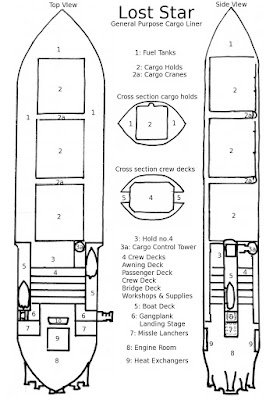 The Cast of Characters for The Bright Black Sea
And finally here is the list of characters for each volume. The ship and its crew change their names in volume three in an attempt to evade their enemies. The Lost Star becomes the Starry Shore, and I've listed the crew's new names with their real, or at least old names in brackets. For the most part I used their old familiar names in the text, unless it involved dialog.

Volume One, The Captain of the Lost Star

Volume Three, The Ghosts of the Lost Star
Additional Characters